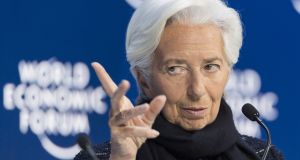 The European Central Bank (ECB) will start buying riskier debt and expand the size of its bond-buying programme, economists predict, as it intensifies efforts to shield the euro zone economy and financial markets from the coronavirus crisis.

The ECB is expected to broaden the assets it buys under its recently launched €750 billion Pandemic Emergency Purchase Programme (PEPP). This will include riskier “fallen angel” bonds that have recently lost their investment-grade credit rating, a dozen economists told the Financial Times.

Most of them also expect the central bank to increase the size of the PEPP scheme that it announced last month in a further escalation of its “quantitative easing” programme under which it has already bought €2.8 trillion of assets.

The ECB’s governing council is due to discuss monetary policy on Thursday, holding the meeting by teleconference for the first time because of the pandemic. While recent strains in debt markets led most economists to believe the ECB will have to beef up its bond-buying programme, they said it may decide not to do so this week. The ECB declined to comment.

“It could also be that they start to buy fallen angels,” said Elga Bartsch, head of economic and markets research at BlackRock. “Eventually I think they also need to step up the PEPP programme and add more time and extra resources to that.”

Frederik Ducrozet, strategist at Pictet Wealth Management, calculated that at the €5 billion-per-day rate it was buying assets under the PEPP, it would be exhausted by September and he expected it to add at least €250 billion of extra firepower by the summer.

After EU government leaders failed to agree last week on proposals to create a €1 trillion-plus recovery fund to support the region’s coronavirus-stricken economies, Mr Ducrozet said the ECB was still “the only game in town” to stop the pandemic spiralling into a deeper financial crisis.

ECB president Christine Lagarde told EU leaders last Thursday that they risked doing too little too late, and forecast the euro zone economy could shrink by 15 per cent this year in a worst-case scenario of the lockdown lasting several more weeks.

Investors are particularly focused on Italy’s rising borrowing costs and worry its bonds could become the biggest “fallen angel” if it loses its investment-grade credit rating over fears about the deep recession facing the country and its mushrooming national debt. On Friday, Standard & Poor’s decided against downgrading Italy, saying the ECB’s bond-buying was “backstopping this additional public borrowing”.

The expected move by the ECB into buying sovereign and corporate “fallen angels” with a credit rating that drops as far as a certain level below investment grade would be aimed at containing the fallout from an expected wave of downgrades in response to the pandemic. Gilles Moëc, chief economist at Axa, said such a move “makes sense” to ensure “the survival of as big a share of the corporate sector as possible”.

It would be following in the footsteps of the US Federal Reserve, which said this month it would start buying “fallen angel” bonds as well as shares in exchange-traded funds that invest in high-yield debt markets.

The high-yield market, often referred to as “junk”, encompasses the debt issued by lower-rated, riskier companies and governments that are more exposed to the impact of the pandemic and the subsequent lockdowns on companies and households.

Both the European and the larger US high-yield markets largely froze during the coronavirus-sparked volatility in March, shutting off capital to lowly rated groups just as their businesses suffered from a drop-off in revenue. But the US market has reopened on the back of the Fed’s decision, and European high-yield bonds also recovered some of their lost ground.

Dirk Schumacher, economist at Natixis, said there were about €65 billion of potential “fallen angel” bonds in Europe that were likely to be downgraded soon, and about $280 billion of such bonds in the US.

“I could see the ECB buying fallen angels,” he said. “They obviously would want to protect their balance sheet, but the overall macro considerations could trump this if things keep deteriorating.”

While it would be welcomed by investors, a move by the ECB to start buying “fallen angels” is likely to trigger criticism that it is going beyond its mandate to control inflation by bailing out over-indebted companies – many of them owned by private equity.

“This would mean extending quantitative easing directly to the worst-hit sectors and companies of the real economy,” said Volker Wieland, a professor at the Institute for Monetary and Financial Stability in Frankfurt.

“Bailing out companies on a large scale by direct purchases of their debt is not really the job of the ECB,” said Mr Wieland, adding: “There could eventually be substantial losses to be absorbed by the ECB, and thus the taxpayer.”

The ECB has already said it would accept “fallen angel” bonds as collateral from banks in return for its ultra-cheap loans. It has also granted a waiver to Greek government bonds that allowed it to buy them and accept them as collateral even though they are already junk-rated.

Last week, Italy’s 10-year government bond yield climbed above 2 per cent for the first time in a month, while the “spread” over German bonds – a closely watched measure of risk within the eurozone – widened close to 2.4 percentage points.

That is not far short of the peak of 2.8 percentage points during a sell-off in the riskier corners of euro zone debt markets in March, when the ECB launched its €750 billion extra bond-buying plan and offered banks more than €3 trillion of ultra-cheap liquidity.

“With credit stresses ever-present in sovereign, bank and credit markets, it remains essential that the ECB stays ahead of the risk curve,” said Lena Komileva, chief economist at G+ Economics.

1 Michael Smurfit: ‘I asked Trump to invite me to the White House for my 80th birthday’
2 Small businesses are cannon fodder in zealous anti-virus experiment
3 Ryanair expects air fares to fall when flights take off again
4 ‘I’m so lucky to be in the Caribbean – a million miles from Derry Girls’
5 Household savings soar as consumers stop spending
6 ‘The recovery needs to be a full-scale economic renewal’
7 Irish business of Carluccio’s restaurants to be wound up
8 Ireland stands to benefit in a big way from investing in public transport
9 ‘Never mind GDP; the most fundamental job of any leader is to keep his people alive’
10 Joint accounts: if one of us dies, can the other access the money?
Real news has value SUBSCRIBE