Five bursaries of up to €20,000 will be awarded annually to women artists 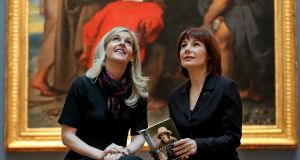 Minister Josepha Madigan with author Sinead Moriarty at the announcement in the National Gallery of Ireland. Photograph: Tony Maxwell/Maxwells

A new bursary scheme for women artists, named for the revolutionary and first female minister Constance Markievicz, has been announced.

Minister for Culture Josepha Madigan announced the establishment of the “Markievicz bursaries” on Wednesday, the 100th anniversary of the enactment of legislation to allow women to stand in general elections.

“I am pleased to announce a new scheme that both honours Countess Constance de Markievicz – herself an artist – and provides support for female artists from all backgrounds and genres in producing new work that reflects on the role of women in the period covered by the centenary commemorations and beyond,” Ms Madigan said.

“Only 113 women have been elected to the Dáil since the countess achieved that landmark result and just 19 of their number have been appointed to cabinet, including myself most recently just one year ago.

“These bursaries are to serve as a reminder that we have a way to travel on the road to full equality in Irish political life. That is why the scheme is deliberately perennial. It is not time limited, but will remain active through this century and into the next, assisting hundreds of women of different creative endeavour in the process,” she added.

Awards will be made each year to up to five artists or writers (either individual artists working alone or in collaboration with others) to a maximum value of €20,000 per individual or group.

The Department of Culture, Heritage and the Gaeltacht will partner with the Arts Council on the governance arrangements and the administration of the scheme. It will open for submissions from mid-January to mid-February with bursaries to be awarded in May 2019.

The scheme will be open via a public call to female artists working in all genres supported by the Arts Council.

One of the bursaries each year will be awarded to an artist working in the Gaeltacht and through the medium of the Irish language.

The scheme will also encourage applications from individuals or groups within culturally diverse communities and from women with disabilities.

The announcement was made in the National Gallery of Ireland, which has partnered with the Houses of the Oireachtas to honour Countess Markievicz’s place in Irish history. Markievicz: Portraits and Propaganda is currently on display in the gallery.