The European Union’s response to the migrant crisis in the Mediterranean had been a “failure”, 'grossly inadequate' and 'shameful', President Michael D Higgins, has said. The President was speaking at an Amnesty International meeting in Dublin. 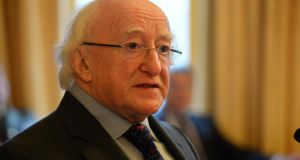 President Michael D Higgins has described the EU’s response to the migrant crisis in the Mediterranean as “grossly inadequate” and “shameful”.

Mr Higgins, who was opening Amnesty International’s 32nd international council meeting in Dublin yesterday, said its “failure” undermined “both the ideal of the EU, and any prospect of that union being an exemplar for international law and its instruments”.

Paying tribute to the role of Naval Service patrol ship LÉ Niamh in rescuing 367 people after a vessel carrying some 650 people capsized north of Libya on Wednesday, Mr Higgins described displacement as the “greatest human rights issue facing the world at this time”.

Some 51 per cent of almost 60 million people displaced by conflict worldwide last year were children, according to the UN High Commission for Refugees.

However, the number of migrants seeking asylum in Europe is a fraction of the global total, according to the commission, with Turkey, Pakistan and Lebanon being the top “host” countries.

Meanwhile, Italian police yesterday arrested five north African men on suspicion of multiple homicide and human trafficking in the presumed drowning of more than 200 people in the Mediterranean this week, saying they used clubs and knives against migrants.

Locked in the hold

Police said many children were believed to be among those who perished.

Two Libyans, two Algerians and a Tunisian – ranging in age from 21 to 24 – were placed under arrest in Palermo after being questioned on Thursday.

Police had earlier mistakenly identified the Tunisian as a Libyan.

Mr Higgins said yesterday that he fully shared with others “a great sense of horror and outrage at the tragic loss of life in the Mediterranean Sea – already 2,000 this year”.

“However, we must acknowledge that the European response as a whole has been grossly inadequate with Italy, Spain, Malta and Greece left struggling to cope with large influxes of refugees and migrants,”he said.

In the French port of Calais yesterday, migrants barely surviving in tents made of plastic sheeting, blankets and tree branches in the “new jungle” described how trying to cross the Channel Tunnel was becoming increasingly dangerous, due to extra security measures.

Ethiopian law student Elias Ali (21) was one of several migrants who said he had decided to apply for asylum in France instead of trying to reach Britain.

He described how his family gave him money to flee Ethiopia after he was jailed on false charges of opposing the government, and he took a boat to Italy from Egypt which cost $2,500.

The boat had 400 people on board and food and water for 11 of the 16 days they were at sea. A 75-year-old Syrian woman died on the 11th day from exhaustion, he said.

A Sudanese migrant with “nothing to lose” climbed four fences, evaded 400 security cameras and international search teams and dodged 160km per hour trains as he walked the 50km Channel Tunnel from France earlier this week – and was then arrested by British police.

They said Abdul Rahman Haroun (40) has been charged with “causing an obstruction to an engine or carriageway using the railway”.

“Now is the time to see if the EU is the EU of solidarity or an EU that has everyone trying to protect their borders,” he said.