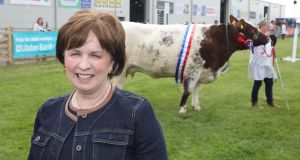 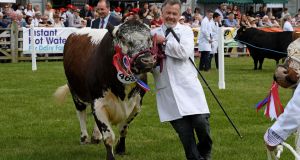 Balmoral Show is one of the biggest events on the Northern Ireland calendar, with more than 100,000 people expected to attend. 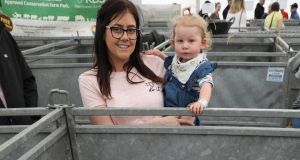 “Calm down and carry on farming,” said the sign on a bag being carried by a young farmer at the Balmoral Show on the outskirts of Lisburn, Co Antrim.

Up until the gates close on Saturday evening, some 100,000 people are expected to attend the annual event where country meets town or, as the show catalogue states, where you experience “cows, ploughs, and plenty of wows”.

So where else would you expect to see the politicians who are competing for the three seats in Northern Ireland’s European Parliament election? Their motto appears to be “Calm down and carry on canvassing.”

Wednesday was the day for the DUP, the SDLP and the Ulster Unionists with their respective candidates – Diane Dodds, Colum Eastwood and Danny Kennedy – roaming around the exhibition stands, glad-handing the townies and the farmers, delivering their spiels and hearing what people had to say.

The respective Sinn Féin, Alliance and Traditional Unionist Voice candidates – Martina Anderson, Naomi Long and Jim Allister – are due to visit on Thursday.

A Leave voter in the Brexit referendum from Randalstown in Co Antrim was making his feelings known to Dodds about the British prime minister in emphatic terms. The DUP is supporting Theresa May’s government via a confidence and supply agreement.

“That woman is stupid,” he said of the prime minister. “Has she any brains at all?”

Dodds, who was later joined by her party leader Arlene Foster at the show, grimaced but the Randalstown Leaver would have his say.

“That woman is very difficult to get through to,” he continued.

“Sometimes Nigel says that about me,” countered Ms Dodds, referring to her North Belfast DUP MP husband, before the Leaver lost the run of himself.

The people of the UK had voted out regardless of the majority of the people of Northern Ireland voting to stay in and he wanted out with them, and the sooner the better.

“Those people in Brussels are taking a hand at us,” he lamented, a comment with which Dodds could safely agree.

“Maybe the people in the Republic would be better off financially coming out with us too,” he added.

While she and Sinn Féin’s Anderson are seen as dead certs for two of the three seats, Dodds said politicians did not take anything for granted and that the canvassing would continue until polling day in Northern Ireland, which is next Thursday.

She acknowledged too that it was all distinctly odd considering that she was campaigning to be elected to a parliament which she wants to exit at the first opportunity.

It was a great day for the Balmoral Show which now is held on the site of the old Maze/Long Kesh prison. The sun beamed down; people were in their summer gear chewing on big beef burgers as, without a thought, they passed by the bulls and cows in the competition arena. There was every size and type of machinery to be viewed and every manner of good food and drink to be consumed.

In truth, regardless of the man from Randalstown, politics and the European election seemed far from the concerns of those in attendance.

Ulster Unionist leader Robin Swann was in positive mood while touring the stands despite the challenge facing his candidate. Like Dodds, Swann referred to the peculiar nature of this election.

How long would the three successful MEPs be in Europe?

“Is it going to be for five days, five weeks or five years? There is a lot of uncertainty about it,” he said.

He was conscious that Kennedy was in a real contest but then again the same often was said about his UUP MEP predecessor, Jim Nicholson. And he held the seat for 40 years.

Swann said that some nationalists were casting this election as a “pseudo Border poll” but that could work both ways by getting the unionist vote out to ensure Kennedy gets the third seat.

Still, even the UUP leader enjoying the glorious day could take his mind off Brexit and Europe for a little while.

“It’s the Balmoral Show, prices aren’t bad and the weather’s good. So there is a good atmosphere about farming no matter what the pundits are saying; there is good heart out here at the minute.”

And off he proceeded to carry on canvassing.

1 Coronavirus Q&A: How to shop safely during Covid-19
2 Coronavirus: Republic reports 22 further deaths, 424 new cases
3 Ireland has strategy to ‘break the chains’ of coronavirus - WHO’s Mike Ryan
4 Coronavirus: Situation in Ireland being ‘misrepresented’ because of limited testing
5 We need to cancel the Leaving Cert and give students predicted grades
Real news has value SUBSCRIBE