Names of 1,100 men and women recorded for posterity in Dungarvan 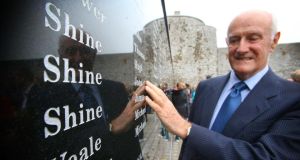 Some have always been remembered by their descendants, recalled from sepia photographs and yellowed letters, while others may have been forgotten, but all were commemorated yesterday when 1,100 Waterford men and women who died in the first World War were honoured in their native county.

John Deasy TD, chairman of the war memorial monument committee, said the idea for the memorial had come about because many of those from Waterford who died in the war had no known graves and were not remembered anywhere.

“Over 200,000 Irish men fought in the first World War and some historians estimate that just under 30,000 of them died. Today we are remembering just 1,100 of those, and I do hope that by the end of 2018 other counties will replicate this initiative to honour their war dead,” he said.

Hidden
“Some of those who are remembered here today have been hidden for almost 100 years and that is unacceptable. Almost half of the people on this wall have no known grave and their families had never seen their names commemorated but now that has changed and they will never be forgotten.”

Wreaths were laid, the Last Post was played and the president of the Royal British Legion in Ireland, Maj Gen David O’Morchoe, read from Robert Laurence Binyon’s poem For the Fallen before Mr Andrews said no parish in Waterford had escaped the carnage.

“We should dedicate this memorial today to the past and to the future – to the principles of equality, of self-determination and peace and we must do this in every corner of the Earth,” he told the crowd of about 600 .

Remembered
Abbeyside man Jim Shine (82), whose three half-brothers, James, Hugh and John, died in Flanders fields, spoke movingly of how so many Waterford men were remembered by people in Ypres and other towns and villages in Belgium where the war dead are honoured.

“It is long past the time when the remembrance of these members of our community should be left to the kindness of strangers,” he said.

“Now these members of our communities, although their bodies lie in obscurity, are no longer forgotten.”