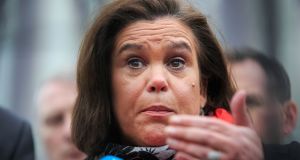 Mary Lou McDonald: “There is nothing to apologise for and no retraction to be made.” Photograph: Gareth Chaney/Collins

The Sinn Féin president Mary Lou McDonald has refused to retract her comment that she believes no one within the senior ranks of the PSNI is capable of taking on the job of chief constable.

Ms McDonald first made her controversial remarks on Monday about no one in the PSNI being acceptable to her to replace chief constable George Hamilton when he retires in the summer.

On Tuesday morning Sinn Féin appeared to contradict those remarks when the party’s policing spokesman Gerry Kelly told BBC Radio Ulster’s Stephen Nolan Show there were “clearly people capable within the PSNI and outside it to apply for this job”.

Mr Kelly said any Sinn Féin Policing Board member sitting on the interview panel for the next chief constable would “act on the basis of objectivity and the basis of merit whether those candidates are from within the PSNI or from outside the PSNI”.

It will be for the North’s 19-member Policing Board, on which Sinn Féin has three members, to appoint Mr Hamilton’s successor.

Ms McDonald’s comments raised questions about whether any of the three Sinn Féin members, including Mr Kelly, would be able to sit on the interview panel.

The North’s Police Federation referred to the possibility of a legal challenge were any of the Sinn Féin board members to be involved on the selection panel.

Ms McDonald first issued her remarks on Monday after she led a Sinn Féin delegation in talks with senior PSNI members about police failing to disclose to the office of the North’s police ombudsman “significant, sensitive information” about Troubles-related killings.

Speaking to reporters after the meeting, she said: “Is there somebody inside who I think should be the chief constable? And I have to answer honestly that no, I cannot identify such a person.”

Her comments prompted speedy criticism from the Police Federation of Northern Ireland, which represents rank-and-file police officers, and from several political parties including the DUP, the Ulster Unionist Party, Alliance, the Traditional Unionist Voice and the Progressive Unionist Party.

On Tuesday the chief constable, Mr Hamilton, also weighed into the row by retweeting a post from the Police Federation that stated: “This amounts to extraordinary interference in an open and transparent selection process.”

Mark Lindsay, chairman of the Police Federation, said: “Her comments have placed her party’s representatives on the Policing Board in a difficult position and in the interests of fairness to senior PSNI officers who might put their names forward for the post, I call on the Sinn Féin president to reflect on her grave miscalculation and apologise.”

Later on Tuesday, Ms McDonald stood by her comments. “There is nothing to apologise for and no retraction to be made,” she told reporters in Dublin. “I have no role to make in the appointment of the chief constable.”

Ms McDonald said her lack of confidence in the top ranks stemmed from the failure of the PSNI to provide crucial information to the ombudsman on the murder of five people by loyalist paramilitaries outside Sean Graham’s bookmakers in Belfast in 1992.

“The PSNI has no credibility in terms of dealing with legacy. They are repeat offenders in terms of not providing information,” she said.

Fianna Fáil TD Darragh O’Brien said the Sinn Féin leader’s remarks had a “real chilling effect across both communities” and should be retracted.

“It’s wholly irresponsible for Sinn Féin not only to suspend the political apparatus in the North, now they are trying to undermine a police service,” he said.

Labour leader Brendan Howlin said there was a process to replace the chief constable and it should be independent and not influenced by any politician.

DUP Policing Board member Mervyn Storey reflected the nature of the general criticism when he asked: “How can any Sinn Féin member sit on that panel and candidates from the PSNI expect to get a fair hearing?”

In the meantime, the North’s Department of Justice, at the request of police ombudsman Michael Maguire, has asked the North’s Criminal Justice Inspectorate to review the PSNI’s methods for disclosing information in legacy cases.

PSNI deputy chief constable Stephen Martin, one of the potential candidates for the chief constable job, last week “deeply and sincerely” apologised and said the non-disclosure was not deliberate.