Martin McGuinness: united Ireland ‘is within our grasp’ 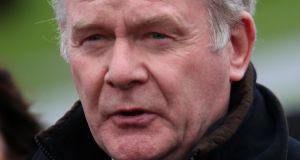 Martin McGuinness: “I have absolutely no doubt that Scotland is now on that inevitable trajectory to freedom. The challenge to us is to put our own struggle onto the same trajectory”

The next three elections – two in the North, one in the Republic – offer the best opportunity to a make a united Ireland inevitable, Deputy First Minister Martin McGuinness has told Sinn Féin members.

Addressing a party meeting in Omagh, Co Tyrone, at the weekend, Mr McGuinness also repeated his call for the SDLP to agree an electoral pact with Sinn Féin for May’s Westminster general election.

Mr McGuinness referred to the fact that Northern Ireland faces a British general election in May and an Assembly poll in May 2016, while a general election must be held by April next year in the Republic.

“These elections give us the opportunity to take more huge strides towards our ultimate goal, to put our struggle on to a new trajectory where the unity of our country and the establishment of the 1916 Republic become inevitable.”

He said Sinn Féin would play a leading role in commemorating the centenary of the Easter Rising.

“But the most fitting tribute we can pay is to realise the Republic envisaged in 1916. We are the only party with the ability and the desire to do that. It is who we are and it is why we do what we do. And our goal is within our grasp.”

He called for 16-year-olds to have the vote in Northern Ireland, saying their having the franchise in the Scottish referendum injected fresh impetus to that debate.

“I have absolutely no doubt that Scotland is now on that inevitable trajectory to freedom. The challenge to us is to put our own struggle onto the same trajectory,” said Mr McGuinness.

Sinn Féin has five MPs, although they don’t take their seats, while the SDLP has three MPs.

At the time Mr McGuinness promised to reciprocate if the SDLP gave Si nn Féin a free run in three constituencies, North Belfast and Upper Bann which are held by DUP MPs Nigel Dodds and David Simpson, and Fermanagh South Tyrone where Sinn Féin’s Michelle Gildernew is MP. She however could be vulnerable if the DUP and the Ulster Unionists run a single agreed candidate.

Mr McGuinness repeated his call for a pact in Omagh on Saturday.

“I believe that the SDLP’s rejection of my call is a serious political mistake and represents a lost opportunity. It demonstrates a lack of strategic vision on the part of the SDLP leadership and is further evidence that they are out of step with the voters and the grassroots,” he added.

“I am calling on them once again to seize the opportunity to send out a clear message of support for progressive politics, the Good Friday agreement and genuine power sharing and partnership government.”

Recent days have seen some political criticism of Sinn Féin in the South for allegedly supporting austerity politics in the North through its endorsement of the Stormont House Agreement while opposing austerity in the Republic.

Mr McGuinness defended the agreement. “Sinn Féin has emerged from the recent negotiations in a stronger position. Our defence of the most vulnerable and our opposition to austerity – whether it is spawned in London or Dublin – was vindicated,” he said.

“The Stormont House Agreement was the best deal possible but, like all agreements, it is the implementation which will tell the story.

“We are now in that phase and we have made a good start, and I want to recognise the positive leadership of Peter Robinson in making and adhering to the agreement,” he added.