Mark Durkan on Belfast Agreement: ‘What are you going to replace it with?’ 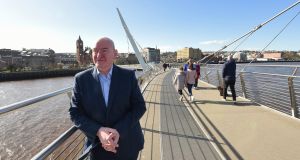 The SDLP’s Mark Durkan on the Peace Bridge spanning the River Foyle in Derry, Northern Ireland. “It’s about getting back to the Agreement. Does that mean that people go back to supporting the SDLP? I don’t know. That’s a choice for future elections, and for the wider electorate.” Photograph: Trevor McBride

Twenty years after the murders of Philip Allen and Damien Trainor, Mark Durkan still thinks of them.

The friends – one Protestant, the other Catholic – were having an evening drink in the Railway Bar in Poyntzpass, Co Armagh, when loyalists burst into the pub and shot them dead.

It was March 1998. At the time, Durkan was engaged in peace talks as part of the Social Democratic and Labour Party (SDLP) senior negotiating team.

He remembers listening to news reports describing the pair’s friendship and reflecting on it during that day’s discussions.

“I said that the friendship between Philip Allen and Damien Trainor should become a parable for the type of society that could be created out of an agreement, if we got one,” says Durkan.

“There was a strong sense around the room that, even though people had doubts and there were big differences about the ideas that were or weren’t on the table, we couldn’t let the people who did this have the last word.

A month later the Belfast – or Good Friday – Agreement was signed; the idea of a joint office of first and deputy first minister was directly inspired by Philip Allen and Damien Trainor.

Seamus Mallon – the SDLP’s deputy leader and the local MP – and David Trimble – the Ulster Unionist Party (UUP) leader – met by chance in Poyntzpass while visiting the victims’ families, and together spoke of the need to show solidarity against the men of violence.

“I saw the pictures of Seamus and David in Poyntzpass,” says Durkan, “and there was a point where you could see Seamus taking David’s arm.

“You saw you could have people of two traditions, democratically standing together and almost literally binding the wounds of the community.”

It’s about getting back to the Agreement. Does that mean that people go back to supporting the SDLP? I don’t know. That’s a choice for future elections, and for the wider electorate

In the Assembly elections which followed the signing of the Agreement, the SDLP received the greatest number of votes, which translated into 24 seats; the UUP was the largest party, with 28. The Democratic Unionist Party (DUP) had 20 seats, and Sinn Féin 18. Trimble and Mallon became first and deputy first minister respectively.

Durkan was elected to the Assembly, becoming minister for finance. It was one of many positions he would hold in the succeeding years, which included deputy first minister (2001-02), SDLP leader (2001-10) and MP for Derry’s Foyle constituency (2005-17).

The SDLP appeared unassailable – the Agreement its great achievement.

But amid the optimism, there was cause for concern. Almost immediately, deadlines slipped. The date for the establishment of the institutions, October 31st, 1998, was the first of many to come and go, as was the requirement in the Agreement for decommissioning of all paramilitary weapons within two years.

Durkan recalls telling the Irish and British governments during the Hillsborough talks in 1999 that they had to make it clear to the UUP that decommissioning was not a prerequisite for the establishment of the Executive – and to make equally clear to Sinn Féin that it was a requirement of the Agreement.

“They just said no, we can’t do that, and instead the two governments came up with this idea that the problem with the Agreement was that there hadn’t been sufficient negotiations between Sinn Féin and the UUP leading up to the Agreement.

A premium on dialogue

“The two governments then put a premium on dialogue involving them and Sinn Féin and the UUP to resolve the issue, supposedly, of decommissioning,” he says.

In this context, Durkan argues, Sinn Féin in the post-Agreement period was able to effectively portray itself as the party within nationalism which was standing up to unionism – terminology which would not feel out of place today.

“Sinn Féin were able to, very effectively, have the canvassing tactic of ‘lend us your vote’,” he says.

“They could say there’s unionist recalcitrance here, they’re trying to renege on the Agreement by denying our mandate, so the best answer to that is to renew our mandate and strengthen our mandate.”

The North has been without a government since the collapse of the Stormont Assembly in January 2017. Fresh elections returned Sinn Féin as the largest nationalist party with 27 seats and, for the first time since its inception, the SDLP is without representation at Westminster.

Despite the difficulties in the implementation of, and adherence to, the Agreement, it remains, in Durkan’s view, Northern Ireland’s “backstop” solution and the SDLP’s “truest place”, which it must continue to support.

“What we didn’t see when it came to the whole question of implementing the Agreement was, I suppose, a strong enough working axis to ensure true adherence to it,” he says.

Today, he advocates a “return to the factory setting” – to the deal that, imperfect as it may be, nevertheless did pave the way for a greater peace in Northern Ireland.

“It’s about getting back to the Agreement. Does that mean that people go back to supporting the SDLP? I don’t know. That’s a choice for future elections, and for the wider electorate.

“But I do think we need to get back to the Agreement per se because I think politics will be in a better place, I think parties will be required to offer more responsible choices to people, and maybe then the public might be in a position to better exercise those choices rather than feeling compelled to vote in a process that is about two parties bigging up against each other,” he says.

And Durkan questions anyone who says the Agreement has outlived its usefulness.

“I think, yes, the Good Friday Agreement has been damaged and dented a bit, partly because it has been taken off road and has incurred some damage – but no, it hasn’t outlived its usefulness. What are you going to replace it with?

For Durkan, the parable of the two friends, Philip Allen and Damien Trainor, remains as relevant today as it was 20 years ago.