Victims of rape and incest should carry babies to full term, say campaigners

‘Save the 8th’ group predicts referendum will not be passed 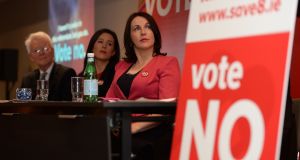 Niamh Ui Bhriain head of the Save the 8th campaign at the launch of the vote No campaign on Thursday. Photograph: Alan Betson

Women who are the victim of rape and incest should carry the baby to full term, according to the Save the 8th campaign.

The group launched its official campaign to retain the Eighth Amendment to the Constitution and outlined yesterday its belief that the referendum result will return an overwhelming majority in favour of keeping article 40.3.3 which protects the equal right to life of the mother and the unborn.

The campaign said removing the rights of the unborn from the Constitution will lead to one in five pregnancies being terminated and will see Ireland developing a British-style abortion regime.

Spokesman for the group John McGuirk said those in favour of the amendment’s retention have reduced their campaign to telling people they are “terrible” if they do not agree with terminations in certain circumstances.

Asked if Save the 8th’s official position was that women who have been victims of sexual assault should be forced to continue with their pregnancy, Mr McGuirk said their stance is that abortion should not be legal.

“That is our position and that will remain our position. The vast majority of women who are raped or experience sexual assault, those women choose to continue with that pregnancy,” he said.

Mr McGuirk said the Government should be far more supportive of women , strive to reducing sexual assault and reduce crisis pregnancies. Encouraging the use of an abortion pill and the end of a pregnancy is a “cop-out”, he added.

The group heard from a number of medical professionals, who insisted the amendment did not provide any hindrance to them in their line of work.

Dr John Monaghan told those present that he had delivered between 4,000 and 5,000 babies during his career and had never been prevented from protecting a woman’s life because of article 40.3.3.

Referring to plans to introduce a conscience clause into any future abortion legislation, Dr Monaghan claimed this was a “mockery of the English language”.

“An alleged hitman would not go far in court if his defence was: ‘I did not do it myself, judge, but I found another fella that would do it.’”

The group has set itself a target of raising €400,000 between now and the conclusion of the campaign. Tens of thousands of euro were collected at a recent anti-abortion rally, it said.

It also questioned the use of taxpayers’ money being used by the National Women’s Council, which is seeking a Yes vote in the referendum campaign.

Mr McGuirk said it had contacted the Standards in Public Office Commission to investigate if public money was being used by the organisation for polling.

The launch was also addressed by Dr Eimear Thornton of NUI Galway, who has four young children.

Dr Thornton told the crowd she had “far more experience in the area of pregnancy than Katherine Zappone, Leo Varadkar and not forgetting Simon Harris”.

It is her belief that every time an abortion is carried out a baby is killed and “a new life is snuffed out”, she added.

More than 320,000 houses have been canvassed by the group and an additional 300,000 will be approached by the end of the campaign, the event heard.

Mr McGuirk described it as “undoubtedly a tight race” but said he was confident from feedback on the doorsteps that a No vote could prevail.

He said the feedback, particularly outside Dublin, was that the “No vote is strong, it is growing and we believe we’re going to win”.