Man dies after getting into difficulty swimming off Lahinch beach 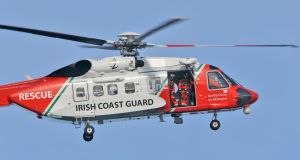 Branches of the Irish Coast Guard were alerted to the man’s difficulty at Lahinch. Photograph: Colin Keegan/Collins Dublin.

A man in his early 40s from Co Clare has died after getting into difficulty swimming on Sunday morning off Lahinch beach.

Emergency services received several calls warning that the man was in trouble while swimming off the beach, which is popular with surfers, at around 10.40am.

Shannon-based search and rescue helicopter Rescue 115 arrived at the scene shortly before 11am and lifted the man from the water.

The helicopter landed the man on the beach where attempts to resuscitate him began with assistance from the National Ambulance Service.

A short time later, he was returned to the helicopter and flown to University Hospital Limerick.

A Garda spokeswoman said the man was pronounced dead at the Limerick hospital on Sunday afternoon.

A spokesman for the Irish Coast Guard said that its nearby Doolin and Kilkee units were alerted and that the Aran Islands RNLI lifeboat was sent to the incident.

In an incident in Dublin, a woman in her mid-50s was winched to safety after tripping and falling about 30ft from the Howth Cliff Walk between Red Rock Beach and the Baily Lighthouse.

The woman suffered “serious but not life-threatening”head and leg injuries in the incident that took place just after 4pm. A member of the public witnessed the woman falling and contacted the emergency services.

She was airlifted by the Dublin-based Rescue 116 helicopter to Dublin Airport and driven by ambulance to Beaumont Hospital for treatment.