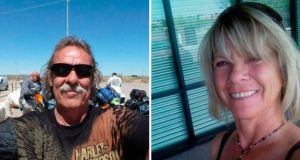 Postmortem examinations are being carried out on the bodies of two North American tourists who died in a pony and trap incident in Co Kerry on Monday.

Rosalyn Few (64) and her partner Norman Larose, who was also in his 60s, died after they were flung down a 12ft ravine on to rocks when the horse bolted in the Gap of Dunloe. Ms Few lived in Phoenix, Arizona.

Killarney Garda Supt Flor Murphy said it is hoped their bodies will be released as quickly as possible once the postmortems are completed.

“It’s a very sad tragedy, we don’t know why the horse and car went off the road at that point, but all aspects will be looked at to determine that,” he told the Kerry Today programme on Radio Kerry.

Supt Murphy added that Garda liaison officers are assisting the four other members of the family who were travelling together in three jaunting cars at the time of the accident.

“We are giving them every assistance with the formalities here and in relation to repatriating the remains. We are helping them deal with the airlines, undertakers and the embassy.”

He paid tribute to the emergency services involved at the scene especially the local doctor who climbed down the embankment to assist and pronounce the deaths.

Kerry Mountain Rescue was called in to assist with retrieving the bodies.

Supt Murphy said that the horse was also seriously injured in the accident and had to be put down at the scene.

Gerry Christie of Kerry Mountain Rescue told the programme that there had been steep, slippery ground at the scene and that while it was rugged it was not far from the road.

It had taken an hour to retrieve the bodies he said.

“We’re used to watching happy tourists. This casts a huge cloud over things. It does cast a shadow in the Gap, but it casts a big shadow somewhere else in the world today.”

President of the local Chamber of Commerce Paul O’Neill expressed sympathy to the family of the tourists and said the “whole town was in shock”.

“We don’t know what happened. All we can do is support this family in any way we can.”

Meanwhile, prayers are being said this afternoon in the open near Kate Kearney’s Cottage at the entrance to the Gap of Dunloe.

A spokesman for the 30 pony-and-trap operators, Paul Cremin, said the family of the deceased had been informed that the prayer ceremony by local retired priest Fr Paddy O’Donoghue from Killarney was as a mark of respect. Everyone was deeply shocked at what occurred on Monday, said Mr Cremin.

“At this time for all involved, we would like to extend our deepest condolences to the victims’ families . . . we are shocked and saddened at the events that unfolded and we will do whatever we can to support the family and our injured colleague at this difficulty time,” said Mr Cremin.

The ponymen did not operate on Tuesday, as a mark of respect.

Ms Few’s daughter and son-in-law and two grandchildren were on the trip through the Gap with them, in separate traps.