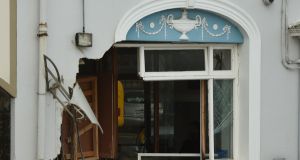 An ATM was stolen from the wall of a bank on Main Street, Kingscourt, Co Cavan. Photograph: Philip Fitzpatrick

Two ATMs have been stolen in two separate incidents in Co Cavan and Co Tyrone on Sunday morning.

A digger was used to remove an ATM from the wall of the Bank of Ireland in Kingscourt, Co Cavan at around 4am.

Gardaí are appealing for witnesses.

“Gardaí­ were alerted at about 4am and immediately went to the scene. On arrival they discovered that a large digger had been used to remove the ATM from the bank,” a Garda spokesman said.

“The ATM was placed on a trailer being towed by a light coloured large four wheel drive vehicle. This vehicle left the scene in the direction of Carrickmacross. ”

The scene is sealed off for a technical examination of the area by Garda crime scene examiners.

Witnesses are asked to contact Bailleboro Garda Station on 042 9694570.

Meanwhile in Co Tyrone a digger was also used to remove an ATM from a filling station in Dungannon at around 4.15am.

“We believe the digger was stolen from a business a short distance away, which caused damage. The digger was set alight at the scene immediately after the theft,” Detective Inspector Trevor Stevenson said.

He asked for anyone who witnessed the incident, or who saw a jeep-type vehicle towing a trailer in the Gortlenaghan Road/Ballygawley Road areas around these times to contact police.

In a statement Bank of Ireland said it is engaging with An Garda Síochána in relation to the incident at its Kingscourt branch.

It said it expected the branch will open again this Tuesday, with the internal ATM available to customers.