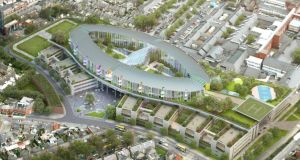 The Government is blamed even by Fine Gael voters for cost overruns at the national children’s hospital, with 69 per cent polled saying it has mismanaged the project.

Voters blame the Government for the cost overruns at the national children’s hospital, with more than three-quarters of them saying mismanagement of the project was responsible for the rising costs, according to the latest Irish Times/Ipsos MRBI opinion poll.

Asked if they believed the rising costs were due mainly to Government mismanagement or for other reasons beyond the Government’s control, 77 per cent of respondents said the Government had mismanaged the project, with just 16 per cent saying it was beyond its control.

Costs of the hospital were recently reported as having escalated to as much as €1.7 billion, prompting a Dáil motion of no confidence in Minister for Health Simon Harris.

The Government is blamed even by Fine Gael voters, 69 per cent of whom say the Government has mismanaged the project. However, other poll findings suggest that this may not directly influence how people vote.

But there is further bad news for the Government on the question of whether voters believed the country was generally going in the right direction, or in the wrong direction. This measurement is often seen as a proxy indicator for approval of the Government – where voters are happy with the general direction of the country, they are less likely to want to see a change of government.

Last year, when support for Fine Gael and satisfaction with Taoiseach Leo Varadkar were much higher, 58 per cent of voters said they believed the country was generally going in the right direction, while just 34 per cent said they thought the opposite.

Today’s numbers show the public mood has become significantly less optimistic since then. Less than half of all voters (47 per cent) now say that the country is going in the right direction, with almost as many (42 per cent) saying it is going in the wrong direction.

That is a net positive figure of just 5 per cent – when The Irish Times last asked the question in January 2018, the figure showed a net positive of 24 per cent.

Among voters who expressed an opinion, majorities among supporters of Fine Gael, Fianna Fáil and Labour believe that the country is going in the right direction, while most supporters of Sinn Féin and the Independents and small parties believe it is not.

Voters are clear, however, that they do not believe there should be an election now.

Just 9 per cent favour an immediate election, while 42 per cent say it should take place after a Brexit deal has been reached.

A further 29 per cent say an election should be held after the next Budget, while 10 per cent favour another time.

The poll also asked voters to rank five issues – housing, health, the economy, value for money in public spending and management of Brexit – in order of importance in terms of how they would influence their vote in the next election.

By a significant margin, voters rated health as the issue most likely to influence their vote, followed by housing. These two options were significantly ahead of the three other issues.

Despite the generally favourable view the public has of the Government’s management of Brexit, this appears to cut little ice politically: just 7 per cent of people say it is the most important issue.

Thirteen per cent of voters say the economy is the most important issue, while value for money in public spending is cited as the top issue by 8 per cent.