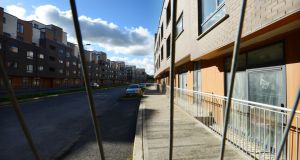 Priory Hall apartment complex in 2012 after residents had been evacuated. Photograph: Alan Betson

People who buy newly-built houses today face the same risk of building defects as those who bought during the boom, according to an assistant professor of architecture at University College Dublin.

“If you bought an apartment this year and you find in five years’ time that you have no fire-stopping or the balcony is unsound, you’re in exactly the same position as people who bought during the boom, the only difference is you have more paperwork from when the building was built,” Ms Hegarty said.

She was speaking in the wake of an investigation by The Irish Times which found multiple boom-era developments with serious fire-safety and structural defects.

Owners and residents at these apartments are facing large bills to fix the problems, as well as the risk of eviction and the prospect of costly legal actions.

In response to these revelations, Minister for Housing Eoghan Murphy said “we’ve made great improvements since [the Celtic Tiger-era] and I won’t let us return to those lax standards”.

He was referring to the 2014 regulations which require on-site inspections by an assigned certifier as part of a formal inspection plan.

However, according to Ms Hegarty, there is a central flaw with this legislation which is that the assigned certifier is appointed and paid for by the developer and is only required to do the amount of inspection the developer asks for.

“It’s so open to interpretation that any developer who is looking to cut their costs can do a very minimal amount of work, maybe not much more than what was done before,” she said.

There needed to be an independent inspection system, where certifiers have the authority to change how things are being built if they see a flaw in it. At the moment, Ms Hegarty said, certifiers can only complain to the developer, they cannot force them to change anything.

Certifiers are also compromised by the fact that they are paid by the developer.

“There’s an awful lot of paper being gathered up but it’s mostly people self-certifying, effectively saying ‘my work is fine’ – it’s not people checking other people’s work.”

She also said the problem of latent defects has been made worse by the fact that “the Government has been hands off”.

There should be a standardised government checklist for all building inspectors, which grades potential problems into things that are “absolutely urgent, like fire safety or balcony problems” and other things which are simply maintenance issues.

At the moment, privately-appointed surveyors and architects include all defects, safety and maintenance when asked to inspect, and “when you put a price to that it can be very high”.

“It’s not prioritised, whether it’s no fire-alarm or no fire-stopping, or if it’s that the stairs need to be painted, it can all give the impression that it is all urgent and that means the costs can be high,” she said.

Having a government-approved checklist of what is urgent and what isn’t would give owners “a lot of reassurance,” she said, “because if an independent inspector said yes there are fire problems, but you can still sleep at night, or we checked your balcony and it’s okay to walk on, it wouldn’t be so bad”.