Lyra McKee’s legacy: 'I have no doubt it will happen again,' partner says 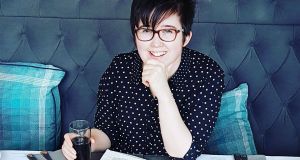 Lyra McKee: was shot dead during riots in the Creggan area of Derry in April. PSNI/AFP/Getty Images

Less than 24 hours after the murder of the woman she planned to marry, Sara Canning found herself on a platform in the middle of Derry’s Creggan estate.

Her partner, the writer and journalist Lyra McKee, had been standing only yards away the previous night, watching a riot, when she was shot dead by the New IRA; now, that same street was filled with people who had come to show their revulsion at her killing.

Canning choked back tears as she spoke. “Lyra’s death must not be in vain,” she said. “Her legacy will live on in the light that she’s left behind.”

In those early days, that light was much in evidence. Amid the shock and condemnation which, despite the ostensible end to the Troubles, remain familiar in the North, there was a sense that this time, something was different.

Canning had come to lay flowers at the spot where her partner had been killed. When one of her friends said the DUP leader Arlene Foster was there, she didn’t believe her.

“I climbed up on a chair and looked out the window [of the community centre] and saw them.”

All the political leaders were there, not just Foster, but also Mary Lou McDonald of Sinn Féin, Naomi Long of Alliance and the SDLP’s Colum Eastwood. All took their turn on the podium, yet it was Foster’s presence, in staunchly nationalist Creggan, that was most significant.

“I do recognise that it was an enormous thing for Arlene Foster to be in Creggan,” says Canning. “I think it was a very brave move to make.”

By the time those leaders reconvened at Lyra McKee’s funeral, fresh talks aimed at restoring the North’s power-sharing Assembly, which had been absent for more than two years, had been announced. On the altar, the parish priest, Father Martin Magill, in Canning’s words, “called them out”.

“Why in God’s name does it take the death of a 29-year-old woman with her whole life in front of her to get to this point?” he asked.

The standing ovation in the church might have been echoed among the population at large. The reaction among people of all backgrounds, says Fr Magill, was “thank God somebody said it”.

“A window had opened up,” he says. “There was a sense of excitement, the politicians were meeting again. There was some hope.”

Yet where there was hope there was also doubt. Even as the people of Creggan and of Derry stood in solidarity with Lyra McKee and her family that afternoon, they remembered other deaths that had appeared to hold out the prospect of change.

Among those present was Pat McArt, the former editor of the Derry Journal. “We have been here before. I would have loved to have thought it would make a difference, but deep down, I feared it wouldn’t.”

The changes that have come – the decriminalisation of abortion in Northern Ireland and the legalisation of same sex marriage – were the result of legislation passed in London, not Belfast.

McKee, says Canning, “would have loved to have got married in Belfast” and dreamt of a wedding in Belfast Castle, which was near to where she grew up on the Antrim Road.

“We didn’t foresee it [the same-sex marriage change],” says Canning. “We discussed it so many times and thought, maybe in about five years, when the petition of concern is finally defeated, we might see it. Unfortunately Lyra didn’t see it in her lifetime.”

As the new year approaches, so does the third anniversary of Stormont’s collapse. In January, Northern Ireland faces another Brexit deadline and the prospect of another round of Assembly elections. The talks that resumed before Christmas are, in effect, the last roll of the dice; if there is no agreement this time, the likely outcome is a return to direct rule from Westminster.

Each of the parties has spoken, repeatedly, of their desire to see Stormont restored, not least in the wake of the general election earlier this month, in which the DUP and Sinn Féin, as the two largest parties, were punished at the ballot box for the North’s continuing stasis. Politically, it is now very much in their interests to see Stormont restored.

People are frustrated – about mental health provision and suicide rates, about funding for schools, and about the failure to deal with the legacy of the Troubles. Problems in the health service have seen waiting lists spiral and nurses and health workers on picket lines this month.

Serious attacks by dissident republicans have increased. Since Lyra McKee’s murder they have made several attempts to kill police officers, not least in Co Fermanagh in August, when a bomb exploded as police and British army bomb disposal experts were dealing with a hoax device nearby.

In September a bomb was found in a car in Creggan. Police said it was intended to for an attack on a patrol. And again, crowds watched as a few young people threw petrol bombs at a line of police Land Rovers just yards from where Lyra McKee had been killed.

The Chief Constable, Simon Byrne, has spoken of his concerns. “I am worried frankly. Over the last few months I’ve dealt with more potential threats to kill my officers since I’ve been here than my predecessor dealt with in a whole year.”

As of mid-December, the Police Service of Northern Ireland (PSNI) has arrested nine people in connection with the investigation into McKee’s murder and the disorder that surrounded it. Two men, aged 51 and 38, have been charged with offences that include arson and riot and petrol bomb offences.

The problems caused by deprivation and hopelessness in placed like Creggan are well-documented; in Creggan itself, there was anger at how the area was styled in some media coverage in the aftermath of the murder.

The night McKee was killed, Canning explained, she was “looking at the demographic of the people who were rioting ... She knew Creggan is quite a disadvantaged area, she was aware of a lot of the societal problems, and it was, what can we change for these young people?

“That’s what she was looking at, the fact that these young people were being dragged back into the violence that had permeated our parents’ childhoods and teenage years, and we all hoped that was at an end.”

She is certain her partner’s death will not be the last.

“I have no doubt it will happen again. I really wish it wouldn’t, but I’m also not optimistic enough to think Lyra is enough to stop everything in its tracks and change the world.

“She would have changed the world in a different way, not in her death. Her death isn’t going to change things the way I would love it to, because I don’t want to see anybody else go through what we’ve had to go through.”

For Fr Magill, the solution is to build relationships. He recalls how the leaders of the North’s five main political parties stood united after McKee’s murder.

“I think people do want politicians standing together,” he concluded.

1 Varadkar says Sinn Féin and Fianna Fáil should form coalition
2 Johnson adviser quits over comments on eugenics and race
3 Rape victim verbally abused in courtroom after two men are jailed
4 Former UUP leader: Unionism must realise it is no longer a majority in Northern Ireland
5 Forget a grand coalition – here is what the next government will most likely look like
Real news has value SUBSCRIBE