Luas to start putting longer trams into service this week 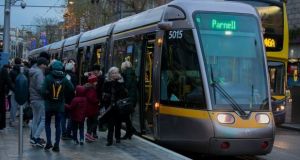 The seven new trams will be the longest single unit Citadis- type trams in the world, according to tram maker Alstom. Photograph: Collins

The first of Dublin’s 55m trams will go into service on the city’s Green Line later this week.

A total of seven of the new longer  trams are to be deployed between now and mid-year at a cost of €36 million.

The deployment of the new trams takes place as Luas operator Transdev and tram provider Transport Infrastructure Ireland tackle chronic crowding issues on the line, which have seen commuters unable to board trams in the morning rush.

A spokesman for Transport Infrastructure Ireland said the first tram would be in service “later this week.” He could not specify the day. He added that “all going to plan” the longer trams would be introduced every few weeks with five of the seven in operation by the start of April, and the remaining two coming into service before the middle of May.

Dervla Brophy of Transdev said the organisation would be reviewing the Luas timetable which will result in improvements which should be evident to the customer in April 2018.

However South Dublin Senator Neale Richmond who is a daily commuter on the line has urged the authority to “immediately order another seven trams” such is the “morning squash” that commuters endure. He said trams coming from the Bride’s Glen terminus are full to the point where more people cannot board when the trams reach Glencairn stop.

He said some commuters were taking trams in the opposite direction, out towards Bride’s Glen in an attempt to ensure they would get space on an inbound tram.

The Senator also said the frequency of the trams at the Bride’s Glen to Sandyford section of the line had fallen from about three minutes to about 15 minutes, since the opening of the Luas Cross City extension.

He took issue with a claim from Transdev that frequency had fallen to about five minutes and said delays were worsening.

“Delays of up to 30 minutes along the Green Line, farcically reported by Luas as delays of five to 10 minutes, compounded the already existing problems of overcrowding and infrequency of trams” he said.

Over the last 13 years the fleet supplied by Alstom has grown in size from an initial 40 trams to 66 trams, with the length of the earlier 30m trams being extended to more then 40m. The seven new trams will be the longest single unit Citadis-type trams in the world, according to tram maker Alstom.

The addition of the 55m trams was “another landmark occasion between Dublin Luas and Alstom, said Piers Wood, of Alstom UK & Ireland. “Dublin was amongst the few first cities in the world to order the new Citadis-type tram fleet from Alstom. Today we see Dublin city again leading the way” he said.

French manufacturer Alstom has sold more than 2,200 Citadis trams to 54 cities across the world and the tram itself is up to 98 per cent recyclable.