Coveney says prize of restored Executive and Assembly worth “stretching for” 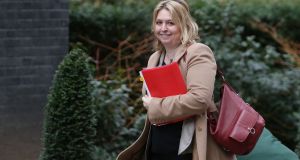 A deal between the British and Irish governments and the Northern Ireland parties to reinstate the Executive and Assembly is “achievable” in the coming days, according to Northern Secretary Karen Bradley.

Following a day of all-party talks at Stormont with Ms Bradley and Minister for Foreign Affairs Simon Coveney, a spokesman for the Northern Secretary said “good progress has been made in discussions during this latest phase of talks but some difficult issues remain”.

“Our assessment is that an agreement in the coming days, while not certain, is achievable,” he added.

The Northern Ireland Office spokesman said there was “no doubt as to the parties’ collective commitment towards the restoration of devolution”.

“Time remains short. We all need to focus our collective efforts in the coming days on working together to form an Executive,” he added.

Ms Bradley is to provide an update to the House of Commons on the talks on Wednesday.

Mr Coveney, sounding a more general and cautious note, said the prize of a restored Executive and Assembly was “worth stretching for”.

Dublin, London and party spokesmen were refusing to speculate on whether a deal could be done this week or next but the general mood at Stormont was relatively upbeat.

In a brief statement, a spokesman for Mr Coveney said the two governments met the parties on Monday to “discuss progress on restoration of a devolved powersharing Executive, which is at the institutional heart of the Good Friday agreement”.

We’ve made some progress on many of those issues, but there are still big, and in some cases, quite significant gaps

“We share the UK government’s assessment that there is a shared commitment across all parties to see the devolved institutions operating effectively in the interests of all the people of Northern Ireland,” he said.

“Time is short, but the prize is one worth stretching for,” he added.

DUP Assembly member and senior negotiator Simon Hamilton said the talks could not be allowed “to run on and on”.

For more than a year the DUP and Sinn Féin have been deadlocked on a range of issues such an Irish language Act, same-sex marriage, and how to deal with the past.

Mr Hamilton said the DUP was seeking a deal “that is fair, that is balanced, that is capable of being supported by all sides and it leads to a sustainable Assembly”. But he said “huge differences” remained between the two sides.

“We’ve made some progress on many of those issues, but there are still big, and in some cases, quite significant gaps,” he said at Stormont.

“This process will come to an end in the next short while and we will make a judgment then as to whether a deal is possible or not,” he said.

“We entered into what we were told and agreed was a short and sharp process to see was an agreement possible. We were told this is the last chance and we accept that the talks cannot go on forever,” added Mr Murphy.