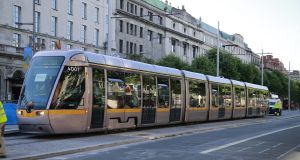 Fergus O’Dowd TD, chair of the Oireachtas Transport committee, confirmed he will facilitate requests to bring in officials from the Luas to discuss a number of issues troubling passengers using the service in the capital. File photograph: Nick Bradshaw

The operators of Dublin’s light rail system will be invited before an Oireachtas committee to answer questions about continued service delays facing commuters on Luas trams.

Fergus O’Dowd TD, chair of the Oireachtas Transport committee, confirmed on Monday he will facilitate requests to bring in officials from the Luas to discuss a number of issues troubling passengers using the service in the capital.

Green Party deputy leader Catherine Martin said she will formally be writing to Mr O’Dowd on Tuesday, to ask that officials from Luas operators Transdev, be invited to come before the committee.

She added she has recently been “inundated” with complaints from Dublin Rathdown constituents using the service.

“Commuting at peak times is currently a nightmare for Luas passengers due to overcrowding, delays, repeated failures of the real time information displays and debit card machines” she said.

Transdev need to answer questions on what plans were in place to deal with extra demand after the cross city project was finished, Ms Martin said. “What plans did they make, and what has gone wrong?” she asked.

Mr O’Dowd, said he would be “very happy” to facilitate the request. He said the committee’s schedule into March was very full, but the request would be accommodated.

In a statement earlier on Monday on the delays the Luas operator said there had been problems following the extension of the Green Line to Broombridge, due to the “availability of trams and high passenger numbers at peak times”.

On both Sunday and Monday evening the Luas informed passengers there would be short delays for commuters travelling on the Green Line.

The Luas introduced the first batch of longer trams on February 7th, and plan to bring in six additional 55 meter trams over the next number of months.

There has also been frequent problems with the Luas real time information displays for commuters since December.

In its statement Transdev officials said early problems with real time information on the smartphone app have now been resolved. The problems were due to “technical issues” integrating the new systems after the two lines were connected.

The statement outlined the real time information boards at stations are still subject to problems, “but we are very close to having these fixed.”