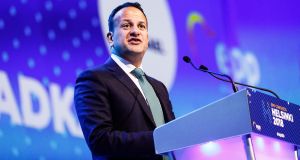 The drafting of provisions for an all-UK cutoms union in the Brexit talks remains deeply problematic for several EU member states, Taoiseach Leo Varadkar has admitted.

Quashing speculation of an imminent deal, he said the complexity of the technical implications were such that it will be impossible to have a summit on the proposed deal before the end of November.

The Taoiseach was speaking to journalists st the European People’s Party congress in Helsinki.

He said that the UK-wide customs proposal “has merit”. It has been sought by the UK as an alternative to the EU proposal for the Irish backstop of a Northern Irelad-only customs arrangement.

“But for a lot of other European countries “ the Taiseach said, “when the protocol on Ireland and Northern Ireland was only about Northern Ireland they were very happy to accept these as special arrangements for Northern Ireland, a small place with 1.8 million people, a relatively small economy, and also with a very unique and difficult history.

“So there was a willingness to make special arrangements and give special treatment to Northern Ireland. But when you want to extend elements of that to all the UK, naturally other European countries’ capitals get quite interested in the detail.”

Mr Varadkar said their “major concern” would be about giving the UK access to the single market in a way that would require it to meet European standards around labour laws, health and safety, environmental protection.

“And I share that concern,” he added. “We can’t have a situation whereby UK firms, after the UK leaves the European Union would undercut us in terms of labour rights or health and safety or environmental standards or state aids.”

The Taoiseach said the detail of any proposal would have to be scrutinised by legal teams in individual states which meant that “realistically the earliest we could have a summit wuld be at the end of November”.

He reiterated his view that if there was to be a review mechanism to determine when the backstop would end, that it could not be a unilateral measure. That, he said, was a red line issue.

“We can’t allow the UK to resile or cancel the backstop unilaterally. The whole point of having a backstop is as an insurance policy. It is that reserve parachute, the failsafe mechanism that gives us a guarantee that whatever happens in the future, there won’t be a hard border on the island of Ireland.”

The Taoiseach paid tribute to the newly elected EPP spitzenkandidat, the party’s nominee to be European Commission president, Manfred Weber. He is the Bavarian leader of the EPP in the European Parliament and “very much a friend and ally of Ireland”, Mr Varadkar said.

He added that he had bilateral meetings at the congress with Germany’s chancellor Angela Merkel and chief EU Brexit negotiator Michel Barnier.