LOL! Twelfth comes early as priest plays The Sash at the end of mass

‘It’s a bit early for that, isn’t it?’ says priest after playing Orange Order tune 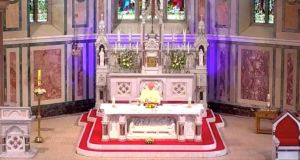 Fr Jimmy McPhillips is seen operating a mobile device to play the final tune but instead of a hymn or some other piece of music we hear the familiar opening bars of The Sash.

The Twelfth of July was brought a little early to a Catholic Church in Co Fermanagh by the playing of The Sash My Father Wore during Sunday morning Mass.

The Orange Order-associated tune featured when Fr Jimmy McPhillips was remotely celebrating 11.30 am Mass at Holy Cross Catholic Church in Lisnaskea which was being live-streamed for his parishioners. (Why do Orangemen march? The Twelfth of July Explained)

His LOL moment - laugh out loud and also in this case Loyal Orange Lodge - commanded much wider viewing however when the little incident was posted on social media.

It happened at the end of Mass when the priest says to viewers “let us go in peace and love to serve the Lord”.

Fr McPhillips is then seen operating a mobile device to play the final tune but instead of a hymn or some other piece of music we hear the familiar opening bars of The Sash.

I saw this earlier and thought it was a fake! Apparently not. Get the volume up! Funniest thing you’ll see today! https://t.co/QvCrT5Q44X

“Sorry, that’s the wrong one. Sorry about that,” says Fr McPhillips as he searches for something else to play.” And in a reference to the Twelfth of July he adds, “It’s a bit early for that, isn’t it?”

He replaced The Sash with Footprints in the Sand by Leona Lewis.

One of the first to spot the post of the incident was former DUP special adviser Timothy Cairns who tweeted,” I saw this earlier and thought it was a fake! Apparently not. Get the volume up! Funniest thing you’ll see today!”

It prompted numerous other responses with some wondering more about his choice of Leona Lewis than The Sash and others complimenting Fr McPhillips for having “a diverse mix on his Spotify”.

Others reckoned he was providing a little bit of humour at a difficult time.

Another however asked why he would have The Sash on his playlist.

“That would be an ecumenical matter,” was the inevitable Fr Jack answer offered online.