Locked down but looking up: What is in the night sky this June?

June is the month of the summer solstice, but also of a range of celestial phenomena 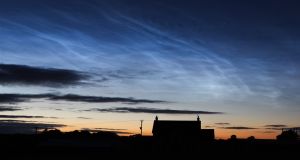 The solstice on June 20th marks the longest day of the year, but this month is also when we have the briefest nights. The lingering twilight from our latitude might inhibit some stargazing activities, but there are bonuses.

Summer months lend themselves to occasional displays of cirrus-like noctilucent cloud (NLC) that form at altitudes of about 80km when temperatures in the mesosphere plunge to -120 degrees Celsius.

Those conditions allow ice to crystallise around smoke particles a few nanometres in size which are left behind when meteors vaporise.

NLCs are visible long after sunset, when their great height allows them to remain lit by the sun. The clouds initially appear some 90-120 minutes after sunset low in the northwest, and track towards the northeast along the horizon, following the sun’s position, during the short night. They have a bluish or silvery hue and appear as a tenuous veil or show a herringbone-like structure.

The clouds are generally seen between latitudes 50 degrees north and 60 degrees north from late May to early July, but their frequency and area of visibility has been increasing.

We’ve already had some sightings of noctilucent clouds in Ireland (via @NLCalerts) in the last week, but it’s too early to tell whether this year lives up to 2019’s exceptional displays. Whatever happens, it is nice to consider these clouds a silver lining in what has been a tough 2020 so far for most.

Ronan Newman in Co Mayo has collated reports of the clouds from around the country for many years, while navigating to the NLCS menu selection at www.nightskyhunter.com brings up an excellent guide by renowned Northern Irish observer Martin McKenna. Blackpool-based photographer Stephen Cheatley has also got a great tutorial at www.stephencheatleyphotography.co.uk/blog/

Our view towards the southeast this month at 11pm sees the ribbon of the Milky Way begin to untangle from the horizon. Three distinctive stars visible in this area delineate an informal pattern known as the Summer Triangle.

Altair, the brightest member of Aquila the eagle, is the closest of these stars, at 16.7 light years away. Studies show Altair has a dizzying 10-hour rotation speed which compresses it into an egg-shape as a result. Our own sun in contrast has a far lazier average 25-day spin.

Blue-white Vega is 25 light years away and is the fifth-brightest star in the sky. It lies just off the corner of a parallelogram of stars outlining Lyra the lyre. Vega is about 2.5 times the diameter of the sun and was one of the first stars to have its distance accurately measured in the 19th century.

Deneb in Cygnus, though the faintest of the Summer Triangle, is a real powerhouse. The celestial swan’s leading light is a 1,550-light-year-distant supergiant 108 times the sun’s diameter and tens of thousands of times more luminous. Deneb would be 15 times brighter than the planet Venus if it were as close to us as Vega.

Not far from Vega is the solar apex, the point in space our sun and solar system are heading towards at 13.5km/s relative to the fixed stars.

June evenings give yet another insight into our galaxy’s architecture.

Arrayed in a halo around the Milky Way are ancient stellar clumps known as globular clusters. Packing a half-million or more stars into compact spherical groups only 150 light years in diameter, some may be the remnant nuclei of much smaller galaxies torn to shreds through interactions with our own over time.

The constellation Hercules boasts the northern sky’s finest globular cluster, which is catalogued as M13 in the list compiled 250 years ago by French astronomer Charles Messier. You can just about see it with the unaided eye from a dark sky location, but binoculars make it a snap and show M13 as a hazy spot flanked by two stars, with its light more concentrated at the centre.

Mercury continues its fine show in the evening sky until the middle of June before diving back into the solar glare once more. It is highest above the northwest skyline at the beginning of the month. Our chart below shows its position at 10.30pm every few days until it is lost from view.

Venus should be picked up towards the end of the third week of June when it rises at 4am. The planet is hidden, or occulted, by the moon during daylight on the 19th from Ireland, but the event ideally requires a telescope to see. Detailed predictions can be found on www.calsky.com

Mars necessitates an early rise too. You should spot its bright ember amongst the dim stars of Aquarius from 2.30am in early June, but at the earlier time of 1am by the 30th. Mars is less than 2 degrees from Neptune on the 13th when both are directly above the last quarter moon.

Jupiter and Saturn rose 15 minutes apart after midnight on June 1st but are well up before the witching hour by the end of the month. Saturn is to the moon’s upper left, with Jupiter also nearby, when the trio rise after 1am on the morning of June 9th.

The moon is full on June 5th, at last quarter on the 13th, new on the 21st, and at first quarter on June 28th. An annular solar eclipse on June 21st will not be seen from Ireland.

The full moon on June 5th, dubbed the “Strawberry Moon”, dips into the outer, or fuzzier, part of Earth’s shadow cast in space to give what is called a penumbral lunar eclipse. Generally, there is no obvious staining of the lunar disc during these types of events unless the moon is more than 70 per cent immersed in the shadow’s outer edge. This is not one of those occasions, as the eclipse is almost over by time of moonrise over Ireland.

The same evening you will notice an orange-tinted star called Antares to the moon’s right. The star’s name translates as “rival of Mars”, and indeed the red planet can sometimes pass through this part of the sky, allowing us to contrast their colours.