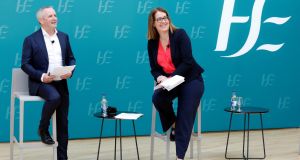 Since May 19th, contacts of confirmed cases have been tested regardless of whether they are showing symptoms of Covid-19 or not, with 322 close contacts were tested in the past week, with a positivity rate of 7.2 per cent. Of the 24 contacts who tested positive, 87 per cent were not showing symptoms.

Speaking at a media briefing in DCU on Friday, HSE chief executive Paul Reid said some 21,000 people were tested for the virus last week, with 1.7 per cent proving positive. This meant the rate of positive tests among close contacts was four times the level in the general population, he said.

As restrictions introduced to slow the spread of the disease are eased, Mr Reid the public needed to strengthen vigilance for the virus. He said this involved “doing the simple things well” such as maintaining social distance and following respiratory etiquette and hand hygiene advice.

“We owe it to everyone to take personal responsibility more than ever.”

There were 140 confirmed cases of Covid-19 in hospital on Friday morning, down 85 per cent from the peak in mid-April, and many hospitals now have no confirmed cases. The number of people in intensive care units stood at 37, down 77 per cent on the peak on April 9th.

The HSE said tere is now capacity to carry out 100,000 tests a week. While turnaround times for these have significantly improved, there are “significant outliers” in the figures which were “pulling us back”, Mr Reid acknowledged.

The median “end-to-end” turnaround time from testing to contact tracing improved to two days last week from more than three the previous week. For hospital cases, this figure is 1.7 days, while in the community it is 2.3 days.

The HSE has a target to report 90 per cent of tests within three days but this was achieved in only 82 per cent of cases last week.

Mr Reid said 21 outbreaks of Covid-19 were reported last week, down from 49 the previous week. This was the lowest number of outbreaks since mid-March.

She said 1,054 cases in 20 meat plants have been reported, and 15 of these remain under active investigation. Mass testing has been carried out in eight plants due to the level of transmission of the disease.

While all workplace contact tracing has been completed, about 90 per cent of tracing in the community has been completed, she said. In one facility, this figure was at 60-70 per cent. She said in some cases the number provided for contacts was incorrect, or no-one answered the call.

Mr Reid said the HSE hoped to launch its contact tracing app later this month once it had received Government approval. The Attorney General has approved the data protection aspects of the app, which are currently being considered by the Data Protection Commissioner, he said.

Meanwhile, the numbers attending hospital emergency departments are almost back to “normal” levels, and activity is higher than usual for over-75s.

Emergency departments are busier treating older people than they were last year for the first time since the pandemic began, HSE chief operations officer Anne O’Connor said, with attendances and admissions of over 75s up almost 4 per cent last week on the same period last year.

Four out of five beds are now occupied by non-Covid patients, and the rest by people with the disease. While non-Covid services were returning, these would be less efficient than in the past due to the need for infection control, and would be managed in a different way, Mr Reid said.