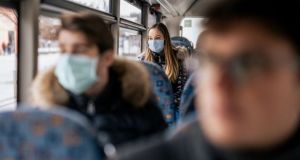 Face coverings should be mandatory in Ireland for anyone shopping or traveling on public transport, an immunology expert has said. Photograph: iStock

Face coverings should be mandatory in Ireland for anyone shopping or travelling on public transport, an immunology expert has said.

Kingston Mills, professor of experimental immunology at Trinity College Dublin, said England has “done the right thing” in making masks compulsory on public transport as part of efforts to contain the spread of coronavirus.

Passengers will not be allowed on buses, trams, trains, coaches, aircraft and ferries without a face mask from June 15th, it was announced this week.

The British Medical Association has already said the order should be extended beyond public transport to all areas where social distancing is not possible.

Prof Mills pointed to a study published in the medical journal The Lancet this week which found face mask use could result in a “large reduction in risk of infection”.

“Face masks have a large part to play as we open up, in terms of more back to work and more shopping,” he said.

“There is no doubt wearing face masks is beneficial. They’re not 100 per cent foolproof ... but they can significantly reduce transmission.”

Prof Mills suggested a government directive on face coverings “would really help” efforts to contain the pandemic and that he would “advocate it becoming a sort of mandatory measure in shopping centres, department stores, shopping in general, but also public transport.”

While there were concerns about supply – and health care staff suffering from shortages – early in the crisis, that is “no longer an issue”.

“They are now readily available,” he added.

Part of the reason so many in Ireland do not wear masks in public is the “mixed messages” they are getting, said Prof Mills.

“Some in this government are very much in favour of it, and yet it hasn’t come out and said it is a requirement,” he told RTÉ Radio One.

Prof Mills said “nobody wants to go back into lockdown” and there are three ways to mitigate against the threat of a resurgence in infections: wearing face masks; quick and efficient testing and tracing; and restrictions on air travel from countries that have high levels of infections.