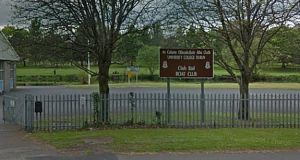 A small strip of land next to the UCD boat club has been set aside by the OPW for a bridge. Google Street View

Government officials are in talks about building Dublin’s newest bridge over the Liffey, Minister for Public Expenditure and Reform Paschal Donohoe has said.

The proposed cycling and pedestrian crossing would link the Phoenix Park to the War Memorial Gardens at Islandbridge.

It would also finally realise the vision of celebrated architect Edwin Lutyens, who almost 90 years ago laid out the original plans for the gardens, commemorating Irish men and women who died in the first World War.

Mr Donohoe said the Commissioners of Public Works are in “discussions with relevant stakeholders with a view to advancing the development of a modern pedestrian and cycle way bridge” linking the park and the gardens.

The crossing would “be sympathetic to the original plans”, he said, adding it would also be “subject to satisfactory funding arrangements being in place.”

Drawings by Lutyens, held by the Office of Public Works (OPW) archives, show he envisaged a three-arched bridge built on the central axis of the main lawn in the gardens, which would cross the Liffey, where various rowing clubs are now, into the Phoenix Park, close to the Magazine Fort.

The OPW is renovating and developing the French-style star fort as a visitor attraction.

Proposals for completing the bridge have surfaced and resurfaced since the gardens were first designed in 1930, but have always been hampered by a lack of funding.

Lutyens’ original plans for a triple-arched bridge, including associated water features on the south bank of the Liffey, were drawn up in the classical style. It was to be made of stone.

But during the 1990s, a consensus was reached that this would be too expensive, too complex – given the obstacles of river, road and a steep incline at the Phoenix Park – and would not be suitable to modern accessibility standards, according to the OPW. It was decided that a modern design, using modern materials, would be preferable.

A small strip of land next to the UCD boat club has been set aside by the OPW for a bridge.

A feasibility study carried out in 2015 proposed two possible schemes. The first was a series of “stepping stones” from park to park, via a bridge, a pedestrian crossing, and either a staircase, zig-zag ramp, or a funicular.

The second is a dramatic single bridge, spanning from a raised mound in the gardens, to just beneath Military Road in the Phoenix Park.

Former tánaiste Joan Burton, a long-time proponent of the project, called for an international competition to be launched for “an iconic” and “visionary” bridge that would connect huge sections of the city and open up parks and attractions to both sides of the river.

“The Liffey needs more cycling and pedestrian crossings on the west side in terms of the population density on both sides,” she said. “This bridge would integrate the Phoenix Park more into the southside, for walkers and cyclists, and the War Memorial Gardens into the northside.

The newly renovated Magazine Fort, Dublin Zoo, Farmleigh House and other attractions in the Phoenix Park would be directly connected – mostly traffic-free – to the War Memorial Gardens, Royal Hospital Kilmainham and Kilmainham Gaol, all south of the river.