FG may allow councillors back rivals to Higgins presidency bid

Taoiseach: Issue of allowing councillors facilitate candidates into race yet to be decided 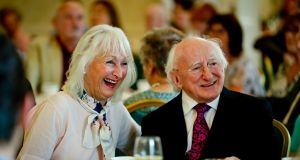 The Fine Gael parliamentary party last week decided to support Mr Higgins for a second term, a move that is expected to be signed off by the party’s executive council this week.

However, the Taoiseach told The Irish Times the issue of allowing Fine Gael councillors facilitate candidates into the race may be considered and has yet “to be decided”.

“We’ll have to see who the people seeking council nominations and whether we would want to facilitate them or not,” Mr Varadkar said, adding: “We will be actively supporting President Higgins.”

Fianna Fáil is also backing Mr Higgins, but party leader Micheál Martin told his national executive last week that he would not block any candidates entering the field, and that it was matter for each party member how to proceed.

A number of Fianna Fáil councillors had already indicated they wanted to facilitate the entry into the race of challengers to Mr Higgins. To secure a presidential nomination, an individual must get the support of either 20 members of the Oireachtas or four county councils.

Independent Roscommon TD Michael Fitzmaurice is attempting to gather the 20 signatures from within the Oireachtas to nominate one candidate. Mr Fitzmaurice estimates there are only enough non-aligned TDs and Senators in the Dáil and Seanad to facilitate one potential candidate.

The council route is then likely to be used by a number of aspirant candidates. Among those considering a run are Senators Gerard Craughwell, Joan Freeman and Pádraig Ó Céidigh.

Businessman Gavin Duffy and barrister and media commentator and barrister Noel Whelan are also among a number of figures considering a run.

Former candidate Seán Gallagher, beaten by Mr Higgins in the 2011 presidential election, has called on councils to nominate candidates but has yet to say if he wants to run himself.

While some of these are understood to support Mr Fitzmaurice’s initiative it is not clear if others, such as Ms Freeman, do.

The chances of Independent candidates entering the race will be significantly enhanced if Mr Varadkar frees his councillors from a strict party whip.

Labour Party leader Brendan Howlin told his executive board last week that he will also make resources available to Mr Higgins, but this can only be done once the President has formally established campaign structures.

Sources who have spoken to Mr Higgins said his intention is not to begin campaigning until the election order for the presidential contest is signed. This so-called “short campaign” is expected to begin in late September or early October.

Meanwhile, Fine Gael MEP Seán Kelly says he would consider running for the presidency were his party to rescind its support for Mr Higgins.

The former GAA president said some grassroots supporters believe the party is giving the field to Sinn Féin by not running a candidate. He said he would be prepared to consider running.

Mr Kelly told Radio Kerry his priority at the moment was to run again for the European parliament.