Taoiseach ‘overwhelmed’ on trip to US and ‘blurted out’ story, says FF’s Niall Collins 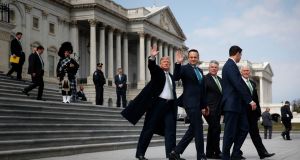 US president Donald Trump, Taoiseach Leo Varadkar and others walk down the House of Representative steps after the Friends of Ireland luncheon on Capitol Hill. Photograph: Tom Brenner/New York Times

Taoiseach Leo Varadkar has been strongly criticised by the Opposition for his comments on US president Donald Trump’s Doonbeg resort.

Some Fine Gael TDs and senior Government figures were also taken aback and said the comments overshadow what should have been a successful trip to Washington DC.

Fianna Fáil sources claimed it showed Mr Varadkar “is not good off-script and does not deal with pressure or criticism [because] he has never got any, ever”.

One Fianna Fáil frontbencher said: “This is what will happen him in an election campaign. It’s a real error.”

Speaking during a lunch on Capitol Hill in front of Mr Trump and members of Congress, Mr Varadkar said he and the president “actually had been in contact before he was president and I was taoiseach”.

He recalled that Mr Trump raised the issue of his recent golf resort purchase in Doonbeg, Co Clare, and his concerns about windfarms that were to be built in the area.

Mr Varadkar said he then rang Clare County Council. “I tried to do what I could do. The planning permission was declined,” he said. “The president has very kindly given me credit for that. I have to say it probably would have been refused anyway.”

While Fine Gael Senator Neale Richmond said it was “clearly a light-hearted anecdote”, one party TD said: “I’m shaking my head the more I think about it. I expected different.”

Another source said Mr Varadkar has often told the same story in private – and enjoys doing so – but added: “You just don’t do it there. It’s pretty awful.”

The Taoiseach’s spokesman said Mr Varadkar had sought a briefing from the local authority on the issue and added there was “absolutely no” suggestion he attempted to intervene or influence the planning process.

Fianna Fáil TD Niall Collins claimed Mr Varadkar “has become overwhelmed by his role and his surroundings on his trip to the United States and that is evidenced by this story he blurted out to everyone’s amazement”.

Mr Collins said it is “completely unacceptable that one of the world’s richest men rings up an Irish Government minister and gets him involved in a live planning application.

“The question which Leo Varadkar needs to address is what influence did he bring to bear on Clare County Council.”

Labour leader Brendan Howlin said the Taoiseach “needs to make clear immediately the nature of these representations and if President Trump or a member of his family asked the Taoiseach to make them on his behalf.

“It would not be unusual for the taoiseach of the day to make queries or representations on behalf of another nation when it comes to government business but planning matters surrounding Doonbeg are clearly a private business matter.”

Green Party leader Eamon Ryan said it is “shocking” that Mr Varadkar did not seem to realise what he did was wrong and instead treats the matter “as a joke”.