Dublin plaza ‘would see 1,600 buses a day’ on Parliament Street 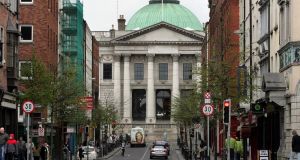 Businesses on Parliament Street in Dublin have expressed concerns about the possible impact of the creation of the College Green traffic-free plaza. Photograph: Eric Luke

Up to 1,600 buses per day – or up to 145 buses an hour at peak times – would move through Parliament Street in Dublin if the proposed College Green civic plaza goes ahead, a planning hearing has heard.

Turning Parliament Street into a “bus corridor” to facilitate the pedestrian and cycle plaza would have a “profound” impact on businesses and residents and a serious long-term impact on air quality, locals claimed.

The oral hearing by An Bord Pleanála into Dublin City Council’s plan to create a traffic-free civic space on College Green and Dame Street heard submissions from a number of experts on behalf of M.E Hanahoe Solicitors and other businesses in the Parliament Street area.

Julian Keenan, director of Trafficwise Ltd consulting engineers, said the technical information supporting the application had “failed to demonstrate in any convincing way that the project constitutes a coordinated approach to transportation which leads to efficiencies and aids in sustaining or improving the existing transport systems of the city centre for any mode of transport”.

It was his understanding that the National Transport Authority (NTA) and Dublin Bus had stated in submissions that their support for the propose project was contingent on the revision of the project to include a two-way bus lane on Parliament Street.

“It is reasonable to assume that in traffic terms the NTA conclude that the traffic scheme proposed in the form submitted by Dublin City Council as part of this scheme is not fit for purpose,” he said.

Dr Imelda Shanahan, a chemist and managing director of TMS Environment Ltd, said the plaza proposal was not supported by the technical information presented by the council and would result in “significant long term breaches in air quality standards”.

She said the combined impacts of all of the changes that would take place, with up to 1,660 buses routed along Parliament Street each day, meant that “the breaches in air quality standards would continue long into the future”.

Consulting architect Des McMahon said the street would become “a bus corridor”, conveying about 145 bus operations per hour. The street’s function would be more akin to an inner-relief road than an inner city street.

“There will inevitably be reductions to pavement width. The trees are unlikely to survive. The required bus movement logisitics at its junctions with the quays at one end and with Dame Street/Lord Edward Street at the other end do not appear to have been examined in detail. I cannot see anything relating to this in the submission. In my opinion traffic chaos, traffic jams, and wall to wall queuing will ensue.”

Average noise levels for both daytime and night time would fall into the “undesirable” category.

Tony Hanahoe, a senior managing partner with M.E. Hanahoe Solicitors,which has its offices at the protected Sunlight Chambers building on Parliament Street, said he was “shocked and alarmed” at the proposal.

“I don’t even think the residents of Temple Bar West have quite come to grips with what’s going to happen here,” he said.

“It will be like walking into a wall of diesel.”

Dublin City Councillor Ciarán Cuffe, an architect and spatial planner, told the hearing the proposal was “a logical and equitable plan that will bring about a more vibrant and social city that can better provide for people of all ages, from 8 to 80 and beyond”.

He said he was struck “by how some car park owners and retailers fear the worst if more space is given to the pedestrian in the city”.

Presentations concluded on Thursday and the next phase of the hearing will commence on Friday morning.