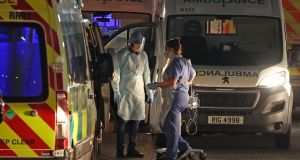 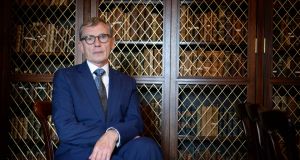 Dr Gabriel Scally, President of the Epidemiology and Public Health section of the Royal Society of Medicine. He said the handling of the pandemic in the North ‘beggars belief’. File photograph: Dara Mac Dónaill

Taoiseach Micheál Martin has warned that the Covid-19 crisis in the North could happen in the State “if we allow things to go out of control”.

The latest figures from the North’s Department of Health showhospital bed occupancy in Northern Ireland is now at 105 per cent.

Expressing solidarity with Northern Ireland where patients were being treated in rows of ambulances outside hospitals because of the lack of beds and increasing incidence of the virus, Mr Martin said the situation there was “very, very worrying and concerning”.

He said the issue would be discussed at the North-South ministerial Council meeting on Friday and “we will work with our colleagues in the Northern Executive”.

He believed the North’s Minister for Health Robin Swann had led well throughout the crisis as he faced a challenging situation.

“It’s a multi- party Executive and that does create its own challenges,” he said.

Mr Martin added that “it also illustrates the exponential growth of the virus once it gets to a certain critical level and we in the Republic need to take note of what’s happening in the North in terms of how we behave collectively and individually”.

Warning that “every contact matters”, he said “what we’re witnessing in Northern Ireland could happen here if we allow things to go out of control - which we’re not going to do”.

With increasing pressures on the Northern Ireland health service due to Covid-19 and general winter pressures the North’s health department also reported on Wednesday afternoon that currently 457 patients are receiving treatment for coronavirus in hospitals .

Of these 32 patients are being treated in intensive care with 25 of them on ventilators.

On Tuesday pressure was so great at Antrim Area Hospital that 17 ambulances were queued up outside the hospital with no room inside to treat the patients. Instead medical staff assessed them in the ambulances.

The handling of COVID-19 in Northern Ireland beggars belief. The health service is on the brink of being overwhelmed, but efforts to prevent growth in cases have been relaxed. Shops, coffee shops, restaurants and bars serving food all open. Disaster looms https://t.co/98KLGELo96

The Northern Trust, which manages the hospital, reported that on Wednesday morning there were no ambulances waiting outside the emergency department (ED) at Antrim Area Hospital.

“The hospital remains under severe pressure with a total of 49 people in the ED, 42 who are waiting to be admitted. Thirty two of those people have been waiting for more than 12 hours,” said a spokeswoman for the trust.

“This is not a situation that anyone wants to see and we sincerely apologise to the patients affected and their families. Staff are working very hard to try to manage the situation and maintain flow,” she said.

A joint statement is expected later on Wednesday from the British government and the administrations in Northern Ireland, Scotland and Wales on whether, as planned, there will be extra relaxation of the Covid regulations in the period from December 23rd to December 27th.

However a public health expert has said the Stormont Executive should close restaurants and bars, restrict shopping and tell people that there will not be a “five-day free for all” over Christmas,.

Dr Gabriel Scally said Northern Ireland should not have lifted Covid-19 restrictions last Friday. It was “a crazy thing to do”, he told RTÉ radio’s Today with Claire Byrne show.

Earlier on Twitter, Dr Scally said the handling of the pandemic in the North “beggars belief”.

He wrote: “The health service is on the brink of being overwhelmed, but efforts to prevent growth in cases have been relaxed. Shops, coffee shops, restaurants and bars serving food all open. Disaster looms.”

He told the programme if politicians cannot sort themselves out then “they’re lost in the North”.

Dr Scally, of the Royal Society of Medicine, said the Irish and UK governments should ask families to postpone Christmas family gatherings to the summer solstice next June.

He said two extra bank holidays should be offered in June 2021 as an incentive for people to keep their distance from their family over the coming holiday season. By then the vaccine rollout would have helped enormously.

He added political divisions were getting in the way of tackling the virus and must stop. “There must be a unified, preventative approach, rather than the current reactive one,” he said.

The chair of the British Medical Association (BMA) in Northern Ireland has warned that the health service in the North is facing into a nightmare over the next few weeks because of a “failure of leadership” in the Executive.

Dr Tom Black told RTÉ radio’s News at One that further restrictions would not make a difference at this stage. “The die is cast.”

Dr Black said the BMA was now going “above the politicians” to talk directly to the public to encourage them to restrict their movements and reduce their social contacts.

There was a real concern about the issues that will face the health service in the coming weeks, he said, particularly in intensive care departments where there was a fear that doctors would be asked to make “moral and ethical decisions” for which they were not trained.

The public in the North had “given up” because of the “lack of clarity” in decisions taken by political leaders at Stormont, he said.

Virtually every hospital in the North was coping with ambulances queuing outside with patients for whom there were no beds, he said.

When asked if the health service in the North would have to seek assistance from the Republic, he said it was “an inevitable consequence”.

He believed there had been a failure of leadership in the North. Looking to the South people could see Leo Varadkar and Micheál Martin working together and the public responding to calls on restrictions. “That’s where we should have been,” he said.

Anne O’Connor, the HSE’s chief operations officer said that the health service in the Republic was “not in terrible trouble”, but warned that as there was an increase in cases in the community, in a matter of weeks, such cases would translate into “issues in our hospitals” and then into critical care.

She added: “There is no doubt our system will be under pressure in January.”

Northern Ireland emerged from a two-week “circuit-breaker” lockdown on Friday. From December 22nd to 28th, people in the North will be permitted to travel anywhere in the UK, and “bubble” with up to three other households from December 23rd to 27th.