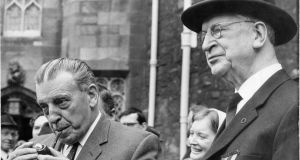 Then president Éamon de Valera and Sean Lemass attending the Michael Collins memorial mass in The Church of the Most Holy Trinity in Dublin on June 23rd, 1969. Photograph: Paddy Whelan /The Irish Times

The Lemass tapes, which were recently made public by The Irish Times, were intended to be the former taoiseach’s authorised biography, it has emerged.

The tapes are based on a series of recorded interviews with businessman Dermot Ryan in the 1960s in which Seán Lemass spoke about his life in politics from the end of the civil war in 1923 until his retirement as taoiseach in 1967.

Mr Ryan said the tapes were intended for the “only biographical study of Seán Lemass which he (Lemass) arranged himself and for which he provided 300,000 words” . The book was never published.

His remarks are contained in a letter to then president Éamon de Valera written shortly after Mr Lemass’s death in 1971.

Mr Ryan suggested to then president De Valera that he was the “most important man in his (Lemass) life” and that it would be a “tragedy” if he did not give an interview.

De Valera declined the offer and stated that as president he could not cooperate. He added, however, that his admiration for Lemass, who had been minister and tánaiste in his governments for three decades, was a matter of record in the newspapers.

The letter, which is in the papers of De Valera in the UCD archives, was put on display at the launch of the Lemass Tapes in the university on Wednesday.

The tapes, which consist of 22 hours of interviews and 1,200 pages of transcripts, were given to UCD archives by the Lemass family, and will be made available to the public from July 2nd.

Members of both the extended Lemass and Ryan families attended the launch. Among those in attendance were Mr Lemass’s grandchildren Seán Haughey, Eimear Mulhern, Geraldine Killeen and Seán T Lemass Jr, his great-grandson Aidan O’Connor and his daughter-in-law Eileen Lemass.

The Ryan family were represented by his son Mark, his daughter Christine and his granddaughter Natasha Ryan.

Mr Ryan said her grandfather had been a substantial public figure in his own right and a successful businessman in the 1960s and 1970s. Mr Ryan was a founder of the Ryan Group, which was a major player in Irish tourism.

She described her grandfather, who will be 90 this year and lives in London, as a “brilliant man with countless achievements” who achieved success in many walks of life including horse-riding, chess and business.

“Only he could leave such a long-lasting mark in Ireland well after his career had ended,” she said.

“One of the articles suggest that Lemass’s abilities could have guaranteed him success in any walk of life. I think the same could be said of my grandfather.”

Ms Ryan and her mother Christine intend to write a book about Dermot Ryan.

Mark Ryan said he knew from an early age of the existence of the tapes and he said he was “absolutely delighted” that they were now being housed in the UCD archives.

UCD deputy president Prof Mark Rogers said the excerpts from the tapes published in The Irish Times showed the range of the interviews were “extraordinary and provides substantial insight into our understanding of Ireland since 1922 but particularly from the 1930s to the 1970s.”

Mr Calleary maintained the archives gave a “whole new perspective on what was a very brilliant man. His contribution to the country is still relevant today.

“His remarks on UK membership of the EU are incredibly prescient. His approach to Northern Ireland is as relevant today. It points to a man who was of his time but also ahead of his time.”

The Lemass tapes substantially re-shape our knowledge and understanding of the man himself. See more from the series here