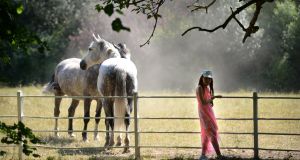 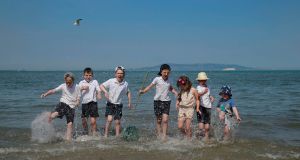 Cooling off on the East Coast. Photograph: Nick Bradshaw 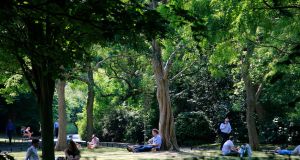 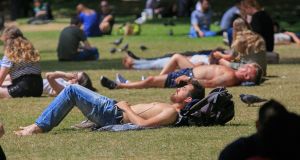 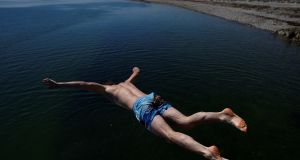 A man jumps into the sea at Salthill beach, Galway. Photograph: Clodagh Kilcoyne/Reuters

A temperature of 32 degress was recorded in the west of Ireland on Thursday as the State’s heatwave continued.

Met Éireann said seven weather stations around the country had recorded temperatures in excess of 30 degrees on Wednesday and Thursday.

The forecaster also said temperatures had surpassed 30 degrees more times in the two day period than in the previous 10 years combined.

The thermometer at Shannon Airport moved beyond 32 degrees on Thursday, which was the highest June temperature recorded in the State since 1976.

The hot weather is due to continue into Friday with temperatures again forecast to reach highs of 32 degrees.

Conditions are expected to cool off slightly over the weekend, with temperatures dropping to the mid-20s, according to Met Éireann.

Saturday will be mainly dry although a few showers could affect western areas. These showers are also likely to affect the west on Sunday with heavy rain pushing in from the south.

However, the warm weather is forecast to continue into the early days of next week.

Met Éireann forecaster Siobhan Ryan said it was “unlikely” that the all-time record temperature for Ireland - 33.3 degrees recorded on June 26th, 1887 in Kilkenny - would be surpassed.

It is already shaping up to be one of the sunniest months on record. Some 98 hours of sunshine - almost three times the average - were recorded across the country in the week from Wednesday to Wednesday.

It has become so hot that the AA has issued a warning to motorists to take care on tertiary roads because of melting tar. Arwen Foley of AA Roadwatch said this could stick to the wheels and attract a lot of debris which made it hazardous for driving.

Several local authorities including Sligo and Donegal have issued warnings about melting tar.

Irish Water said it was operating on a “knife edge” to keep supplies flowing during the prolonged dry weather and have urged the country to “pull together” to prevent taps running dry. In Dublin, pressure is being reduced at night time to protect supplies.

Eamon Gallen, general manager of the utility, said demand in Dublin earlier this week reached a “very concerning” peak while Donegal, Galway, Limerick and Mullingar have been deemed as “high risk”.

About 10,000 households were coping with restrictions or no water at all for periods, mostly in the Bennettsbridge area of Co Kilkenny while supplies were also being interrupted in parts of Granard, Co Longford, and Kinnegad, Co Westmeath, he said on Thursday morning.

“Demand for water is increasing while levels of water in rivers and lakes are dropping significantly, which means there is less water to treat to supply to homes and businesses,” Mr Gallen told RTÉ Radio.

“The conservation message is having an impact, we can see that in demand,” he said, appealing to the population to conserve where possible so as supply isn’t shut off for friends, family and neighbours.

In particular, he urged people not to be using hoses or power washers, watering gardens, washing cars or filling paddling pools. Mr Gallen said people should have shorter showers rather than a bath and not run the tap when brushing teeth.

Minister for Agriculture Michael Creed said State and private advisory services are working with farmers threatened with fodder shortages because of drought conditions in some parts of the country.

“The solution to this is rain, and unfortunately I’m not in a position to deliver that,” he said. “It is difficult, that is undoubtedly the case.”

Race meetings at eight greyhound stadium on Friday have been delayed by one hour to allow for cooler temperatures to ensure the welfare of greyhounds. Affected stadia include Clonmel, Cork, Galway, Kilkenny, Limerick, Newbridge, Tralee and Waterford.

Racing for Friday has been cancelled at Youghal and Longford which will postpone the €10,000 Longford Greyhound Derby Final.

Racing at Shelbourne Park and Dundalk Stadium on Friday will proceed as planned.

The Irish Greyhound Board (IGB) has suspended all racing and trials between 10am and 7.30pm each day with immediate effect.

Iarnród Éireann has advised customers to stay hydrated when travelling during the hot weather spell, and are distributing 50,000 bottles of water to customers free of charge at major stations over the coming days around the network.

Iarnród Éireann has also put into operation a series of hot weather protocols to ensure services run without disruption. Fleet maintenance will focus on cooling systems on board, and on ensuring air-conditioning is operating well on equipped fleets, with fleets being monitored remotely and in maintenance centres.

Some track maintenance works are being deferred, as unsettling the track bed can increase the risk of rail buckling in the heat. However, engineers say that rail heat levels have not approached levels to cause concern or to require speed restrictions yet.

It has become so hot that members of the the normally stuffy Barristers Tea Room Restaurant in the Four Courts can remove their jackets.

The notice was pinned to the door of the restaurant with the caveat in small print that the recommendation came from the Health Service Executive (HSE).

There was good news for bathers in the north Dublin area. Fingal County Council has lifted the temporary ‘do not swim’ notice for Rush south beach which was issued last Friday due to the risk of deterioration in water quality following an emergency sewage overflow at Rush east shore. Samples of the water were taken on Monday and the results were excellent.

Conor Faughnan, of the Automobile Association, said its breakdown service has been very busy because of hot weather problems. These include vehicles overheating and “lots and lots of tyre problems”.

“In very hot weather if your tyre is weak, if it is under-inflated, has any blisters on it, if the tread is worn out, weather like this will find it out,” he told RTÉ Radio One. “The hot weather causes the tyre to expand and that exacerbates wear and tear. We’ve had a lot of call outs for tyres over the past few days.”