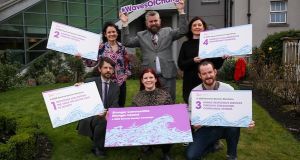 State funding for charities needs to be done on a multiannual basis and for a minimum of three years, The Wheel has stated.

The organisation, which represents 1,700 bodies within the €7 billion charity and voluntary service sector, has suggested such a move would “greatly reduce” the administrative costs for organisations and give certainty to their work forces.

The Wheel has also called for State funding to be used to help charities meet the costs of compliance.

It believes that charities often have to do duplicate reports across state bodies describing the practice as “inefficient, unnecessary and unsustainable”.

In its general election manifesto entitled Stronger Communities, Stronger Ireland, The Wheel says uncertain income streams cause a lot of stress and mean that charities cannot plan ahead as they would wish to do.

It suggests that rural Ireland is being “held together by community and voluntary groups” providing services that the State cannot or will not provide.

The Wheel public policy director Ivan Cooper said recovery from the economic crash has been limited in rural Ireland and voluntary organisations survive with little in the way of funding.

“Community and voluntary organisations delivering these services and supports are struggling to meet an increase in demand for services combined with increasingly precarious funding arrangements and demanding compliance requirements.”

All the political parties were invited to the manifesto launch though none sent a sitting TD.

Fine Gael election candidate Deirdre Duffy, who has had a long time interest in the sector, said voluntary organisations should not be treated like “second-class citizens”.

She cited her involvement in the Together for Yes campaign as an example of how committed volunteers can change society.

“We bring flexibility, we bring innovation, we see around corners. We change things,” she said.

“If everything has to be delivered by the public service, you are stifling and you are not letting room for other models of engagement. We provide a magic touch that no State can provide. Politics of the future has to find a common purpose.”

Fianna Fáil election candidate Deirdre O’Donovan said regulations take away time and energy from voluntary organisations though governments are dependent on such organisations.

“The passion and the drive that you have is used against you. We should be working and acknowledging what our community sector is doing,” she said.

She maintained single year funding “does that work” and said Fianna Fáil has a manifesto commitment to ensure that voluntary organisations and charities in receipt of state aid will get multiyear funding.

Green Party candidate Cllr Peter Kavanagh said Ireland did not have an advanced philanthropy model despite being a generous country.

“We don’t have an effective culture among high-worth individuals, among corporates, among any kind of organisation that can be tapped for funding,” he said.

“We don’t have tax effective giving in a major way. We really need to radically reimagine philanthrophy.”