Large gorse fire in Sligo brought under control after 30 hours 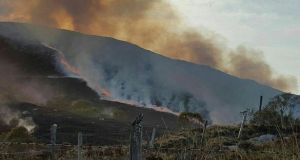 The huge gorse fire at Ballintogher in Sligo, which raged for more than 30 hours. Photograph: Sligo County Council

A large gorse fire that raged on a mountain in Sligo for more than 30 hours has been brought under control.

Sligo County Council confirmed the fire incident at Killery, near Ballintogher, was closed at 10.30pm on Thursday night.

Tom Kilfeather, the council’s director of services, said the fire had been “devastating” for an area of outstanding natural beauty in Sligo.

The fire had involved some 32 hours of incident management on the site, with four units of the Sligo fire service, as well as units from Leitrim and Donegal involved.

The Sligo Coast Guard helicopter, Rescue 118, had also provided invaluable service in helping those managing the incident to see the extent of the fire, Mr Kilfeather said.

He said some small pockets of fire continued to smoulder but that these did not pose dangers to the public.

Speaking on RTÉ’s Morning Ireland, Mr Kilfeather said the council would consult with Coillte, the forestry service, today. While the area was predominantly under gorse, Coillte had a “significant” forestry holding.

He expressed concern at the possibility of further fires as the weather was forecast to be good into next week.

Large gorse fires have been burning in other areas around the country including Dublin, Sligo, Roscommon, Kerry and Galway.

On Tuesday a large gorse fire in Howth, Co Dublin was brought under control by four units of the Dublin Fire Brigade. During the operation firefighters deployed a drone to monitor the spread of the blaze.

Wildlife groups have laid the blame for the latest outbreaks on some in the hill farming community who they say start fires to clear heather from their land.

The Irish Wildlife Trust called on farming organisations and politicians to act immediately to protect wildlife and halt the destruction caused by gorse fires.

Spokesperson Pádraic Fogarty said the damage being caused was ‘enormous’ and that there was an urgent need for a solution.

“The Irish hills are pretty silent and lifeless because of years of fires,” he told Morning Ireland.

Mr Fogarty added that about half of the fires were happening in areas that have some of the highest levels of protection for areas of natural conservation in Europe, but that nothing was being done to stop them.

He said there needed to be stronger statements by farmers’ organisations, but also from politicians, who had been “totally silent”.

Mr Fogarty said the Wildlife Trust had established through records obtained under freedom of information legislation that no farmers have been penalised for setting fires.

“They are getting away with it. Evidence is difficult to find.”

He claimed that already this year more than 60 fires had occurred between March and the beginning of May.

“People throw a match and they walk away. It is supposed to be ‘controlled burning’ but there is no control. That doesn’t happen in Ireland.”

He warned that year after year of fires was wiping out wildlife.

“The damage is enormous.”

The Irish Wildlife Trust, Birdwatch Ireland, An Taisce, and the Hedge Laying Association of Ireland have created a petition to call for changes to legislation proposed by Minister for Heritage Heather Humphreys.

They say proposed changes to Section 40 of the Wildlife Act contained in the Heritage Bill 2016 are unjustified and damaging to natural heritage.

The Minister is proposing a two-year pilot law with a rollover clause, which would allow cutting, destroying and removal of hedgerows in August and burning in the uplands in March.

“During these months birds are trying to lay eggs and raise chicks and other wildlife such as bees and hedgehogs are still dependent on these ecosystems,” according to the Irish Wildlife Trust.

It said strong data already existed showing that birds were nesting during August and March.

There was, it said, a “severe lack of scientific data” to suggest that these changes to the Wildlife Act would not have a “disastrous effect on wildlife, including wild bees and threatened birds such as yellowhammer and curlew”.

“Significant research over at least three years would be needed before the proposed changes can be safely made introduced.”