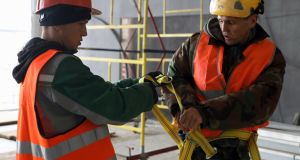 Key labour shortages will have to be fixed if the Government’s €115bn National Development Plan is to be successful, the construction industry has warned. File photograph: Sergei Malgavko/TASS via Getty Images

Key labour shortages will have to be fixed and rising construction inflation curbed if the Government’s €115 billion National Development Plan (NDP) is to be successful, the construction industry has warned.

The collapse of apprenticeship numbers during the recession has led to a skills shortage in key construction trades. In 2014, for example, just 582 people took up plumbing, bricklaying and carpentry apprenticeships.

The number entering such apprenticeships climbed steadily to 914 in 2016, and 1,180 last year.

In the NDP, the Government plans to spend €300 million over the next decade to upgrade further education, including “the expansion, upgrade and renewal of facilities and equipment required to meet the growing demand for a broadly-based apprenticeship system”.

In a report due to be published on Saturday that maps the price of building tenders, the Society of Chartered Surveyors Ireland (SCSI) said construction inflation was now matching levels last seen in 2008.

Prices have risen by more than 6 per cent in the last year, while the SCSI said it believed that costs will rise a further 7 per cent this year – a prediction that led the group to express “concern” after the NDP was revealed yesterday.

Áine Myler, director general of the SCSI, said current building inflation was “simply not sustainable in the medium- to long-term”, noting also that building firms “are finding it more and more difficult to recruit skilled and unskilled labour”.

Construction was decimated during the economic crash. Between 2007 and 2013 more than 170,000 workers left the industry, and 14,000 businesses went bankrupt.

“[They] are already in high demand, and the pipeline of projects set out [in the plan] . . . will increase demand further,” she said.

Civil engineers are particularly scarce, said Ms Spillane. She also said better planning was the key to Ireland’s future, particularly since planning in the past had been short-term, had failed to take evidence into account and had suffered at the hands of the electoral cycle.

Saying that the plan could be “a game-changer”, Tom Parlon, head of the Construction Industry Federation (CIF), added that headline projects, such as the Dublin Metro and the Cork to Limerick M20 motorway, will bring heavy demands.

“For many of our regions’ sub-sectors such as contracting and housebuilding, the recovery never arrived, and they have been fundamentally undermined,” he said, adding that the 10-year NDP “could kickstart construction activity in the regions”.

He said the challenge will be to hire people: “Just this month, the industry marked the fact that it has hired 50,000 people since the nadir of the recession in 2013; hiring up to 900 extra workers a month.

“For the first time in many years, parents and young people considering careers can look to construction and see a modern industry with a stable stream of work and excellent global career prospects.”