‘All we are asking is for people to follow the guidelines,’ says hotelier in west Cork town 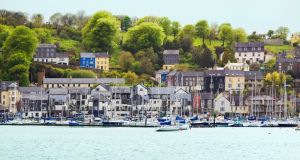 ‘We have had a lot of people from Dublin and from Cork city. It’s only up the road but they still see Kinsale as an escape,’ says Amy Buttimer of Actons Hotel. Photograph: iStock

However, many businesses say they are conscious to check with any overseas visitors that they have quarantined while striving to maintain Ireland’s reputation for warm hospitality.

Michael Frawley jnr in the White House, Kinsale said if it transpired that an overseas group dining in their restaurant had not quarantined, he would feel obliged to ask them to leave .

“You have a responsibility to your staff and your customers to be careful and you don’t want put them in jeopardy for the sake of a table of four that might make you anything from €50 to €200 because in the long run, it’s just not worth it.

But Mr Frawley said he found out on the first week of reopening that it is not as simple as might seem. He said they found themselves with several groups of French speaking tourists only to discover their visitors were living in Wexford and Wicklow.

We are looking forward to being able to welcome everyone that walks in our door very soon, but for now to keep everyone safe, we request that all guidelines are adhered to prior to us being able to do so. #staysafe @poloconghaile @LucindasIreland @pure_cork @kinsale_ie pic.twitter.com/9ON8mBEl8I

“When the story broke about the restaurant in Tralee refusing people, my initial reaction was that’s a bit drastic but then on reflection, they did what we all said we were going to do but were afraid to say publically. In a way they’ve done us all a great service by being the first to do it.”

Ciarán Fitzgerald of the 33 bedroom Blue Haven Hotel in Kinsale said the hotel had received a lot of attention after tweeting that anyone who has travelled from abroad but has not self-isolated for 14 days should not enter their premises.

Mr Fitzgerald said the overwhelming response had been positive with people feeling reassured that the hotel management were doing everything they could to ensure a safe environment for both customers and staff.

“We haven’t seen many overseas visitors in the town. Usually our split would be 50/50 between domestic and foreign visitors and of those foreign visitors, some 70 per cent would be American but all our group US business has deferred to next year so it looks like being 100 per cent domestic business this year.

“We’ve heard of other towns where large groups of foreign visitors have arrived so we’ve put protocols in place - the key is to do it respectfully. We welcome overseas guests every year and we want to welcome them back so we don’t want to send out any messages that might offend people.

“All we are asking is for people to follow the guidelines - if you come and sign a declaration saying you have quarantined for 14 days, we will roll out the red carpet and open the doors to you, it doesn’t matter where you come from once you followed the guidelines and quarantined here.”

Mr Fitzgerald said he believed that it was better to adopt such an approach and offer reassurance to both staff and other customers as he believed in the medium to longer term it would prove more beneficial for a town like Kinsale where some 1,000 people rely on tourism for their living.

Over at the 77 bedroom Actons Hotel, sales and marketing manager Amy Buttimer said all their bookings and business since they re-opened were from Irish guests.

“Kinsale is well known overseas so we would be very heavily dependent on the UK and US markets. Overseas visitors would probably account for 50 per cent of our business but since we re-opened, the pick-up has been all domestic, nothing from overseas,” she said.

“We haven’t seen any Americans and we’re not going to see any tours this year but in terms of the domestic business, Belfast is the furthest people have come from and we have had a lot of people from Dublin and from Cork city. It’s only up the road but they still see Kinsale as an escape.”