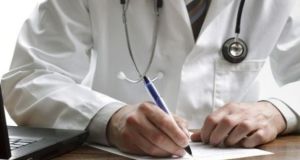 Dr Maitiu O Tuathail said during June they would go several days without any referrals at all, but there has been a notable upsurge since the latest lockdown restrictions were lifted on June 29th.

The number of people in Dublin presenting with Covid-like symptoms is approaching figures similar to March before the surge happened, a well-known GP has warned.

His colleagues at Ranelagh Medical Centric Health, where there are eight GPs in practice, are seeing similar numbers.

He said during June they would go several days without any referrals at all, but there has been a notable upsurge in referrals since the latest lockdown restrictions were lifted on June 29th.

“It ’s a steady trickle, but it has been increasing every day from eight to 10 to 12 up to today (Friday) when my entire morning was patients with Covid-19 like symptoms,” he said.

“It is very reminiscent of March. The pattern would have been very similar. We would have seen an increase in patients day-by-day requesting Covid-19 tests and it culminated in this morning.

“It’s a worrying trend and it’s not something that we want to see. Many of my colleagues in Dublin are seeing the same pattern.”

Dr O Tuathail said that the increases in referrals seems to be confined to Dublin at present.

He also said some of the referrals may be down to the use of the app which tells people to contact their doctor if they have certain symptoms.

He stated that things have changed since March when those who were being tested often had to wait for weeks for results. Now results can come back within 24 hours allowing for contact tracing to happen quickly.

“The one benefit is that everybody that I spoke to today has been tested. That’s a huge improvement. Testing is where it needs to be at.”

Commenting on the latest figures, which show 34 new cases here, he said a figure of 29 was enough to spur the lockdown in the middle of March.

Dr Ray Walley, a GP at the Glasnevin Avenue Medical Centre, said he was also witnessing an increase in the numbers presenting with Covid-like symptoms.

He said his biggest concern was that people were presenting often a week after first exhibiting symptoms of Covid-19 at a time when they may already have infected other people.

Dr Walley, a former president of the Irish Medical Organisation (IMO), said the virus had never left north Dublin and there was always a steady supply of cases presenting at GP surgeries, but he said he was seeing three or four people a day with Covid-19 symptoms now.

Dr Walley said the Government was right not to move to phase four of lifting Covid-19 restrictions.

“The problem is that the deaths only come four to six weeks after the numbers go up,” he said. “All of those very bad numbers take that time to come in.

“Young people are not socially distancing. Our whole problem with alcohol is that it reduces your alertness.

“Young people do not get it severe, but we have had deaths of younger people – I’m talking about 45 or 55 year olds. Youth is not a protection though for not getting it severely.

“I have seen a GP in his forties who had it and it took him six weeks to get over it. He’s a healthy individual.”