History will not look kindly on mask holdouts 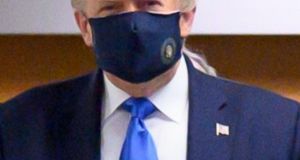 President Donald Trump in a mask on a rare occasion: his resistance to wearing a mask has turned it into a marker of political affiliation. Photograph: Erin Scott/New York Times

If a cheap pill were to go on sale tomorrow that scientists believed probably limited how far exhaled breath could travel and thereby reduced person-to-person transmission of Covid-19 in enclosed spaces, there would be a run on the pharmacies in the morning. Anyone who stood aloof from the frenzy and opted to go without that tablet would be regarded as a crank or a lunatic.

Yet we have that pill, only it’s not a pill but a simple piece of fabric with elasticated bands at either end. And far from having been universally embraced, this potentially life-saving technology is proudly shunned by heads of state, dismissed by many others and largely ignored by large parts of the population.

Only last week did Donald Trump deign to follow the guidance from his own public health officials, having obstinately refused to wear a covering for five months. Boris Johnson rarely wears one and not until recently did Brazil’s Jair Bolsonaro, who now has Covid-19.

But the mixed messaging has come from public health experts as well. In late February, Robert Redfield, director of the US Centers for Disease Control and Prevention, was asked whether people should wear masks and replied “No”. The same week, the US surgeon general Jerome Adams tweeted “STOP BUYING MASKS”. The World Health Organisation initially advised against using masks in ordinary circumstances. In Ireland, the Government did not recommend their use until May 15th, more than 11 weeks after the first Covid-19 case was reported in the State, and only this week, another two months on, did they become mandatory on public transport.

Large-scale studies to evaluate the effectiveness of face masks are notoriously difficult to carry out, but there is a growing body of scientific evidence pointing to their value as part of a toolkit that includes hand-washing, distancing and good coughing etiquette. In particular, the growing consensus is that masks on sick people (and, with Covid-19, that includes many people who do not know they are sick) prevent the virus from spreading. One study, at the University of Edinburgh, found masks could limit how far exhaled breath travelled out by up to 90 per cent, while a German analysis found the daily growth rate of infections fell by 40 per cent after mask use was made compulsory in the city of Jena.

Asian countries, where mask-wearing has been normalised for many years, partly owing to previous experience with epidemics, encouraged mass mask-wearing long before the West came around to the idea. And while it’s early to judge how significant a role those masks have played, it’s inarguable that of the countries that took the most serious and comprehensive approaches to the crisis, and did so the fastest, almost all were quick to embrace the mask.

Today, the WHO, the major public health authorities and almost all states recommend their use in certain places. Along the way, however, the issue has taken on partisan political dimensions. In the US, the official advice has met fierce resistance on the right, where distrust of science and an aversion to being told what to do by the government has resulted in anti-mask protests and large-scale defiance of that guidance.

Whereas liberals see in masks a symbol that they take the virus seriously and are willing to make personal sacrifices for the greater good, many conservatives regard them as a sign of overreaction and an unacceptable trampling on individual liberties (in this case, presumably, the right to make other people sick). The leading holdout, at least until this week, was of course Trump himself, whose resistance to wearing a mask helped turn it into a marker of political affiliation. A Gallup poll in April found that women, Democrats and city dwellers were all more likely to cover their face.

Where mask-wearing rates are low on this side of the Atlantic, the resistance appears to be as much to do with indifference, a fear of looking silly or even a reluctance to draw attention to oneself as to politics, but ideological strains are still to be found. The British Conservative MP Desmond Swayne this week called a new rule on wearing masks in shops a “monstrous imposition”, while in the Belfast News Letter on Thursday Sammy Wilson, a DUP MP, denounced the same requirement as an intrusive escalation in “state interference”. “It should be up to individuals to decide what actions they wish to take to ensure their own safety and their social responsibility for others,” he wrote.

In other words, one should be free to choose whether to protect fellow citizens from a deadly disease or potentially expose them to it. Here, Wilson candidly captures the root of the ideological objection: he resists the mask because in his mind it stands for all the things – social solidarity, communitarian or collective sacrifice – that his politics deny.

When the history of this global crisis is written, it may turn out that masks played a marginal role. Or it could be that they will have been decisive in containing the spread and keeping people alive. In neither scenario is it easy to envisage that history will look kindly on the perspective of Trump or Wilson.

1 Co Donegal hotel offers €2 rooms to locals to circumvent Covid-19 outdoor dining rules
2 Mary McAleese: ‘I’m a bit of an ’oul interrupter. That’s what I hope to be’
3 Blackrock and Mulhuddart: How Covid-19 affected two Dublin suburbs
4 People who fail to self-isolate should be fined for their ‘selfish behaviour’, says GP
5 Covid-19: Contact tracers to start looking into where people are infected
Real news has value SUBSCRIBE