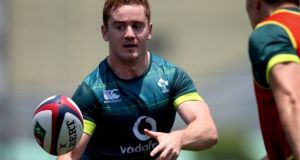 Ireland rugby internationals Paddy Jackson and Stuart Olding have pleaded not guilty to charges of raping a woman in south Belfast in June last year.

Solicitors for the Ireland and Ulster rugby players entered not guilty pleas on their behalf on Wednesday at Laganside Magistrates Court in Belfast.

Legal representatives for two other men, Blane McIlroy and Rory Harrison who face charges linked to the alleged rape also entered not guilty pleas on their behalf.

None of the four appeared in court in what was the first time that the charges against the men were presented in front of district judge Fiona Bagnall.

They were not obliged to appear.

The next hearing will be on September 6th when Judge Bagnall is expected to fix a date for a committal hearing.

That hearing will decide whether or not the cases against the men must go to trial in front of a jury at a higher Crown Court.

Again the four are not required to appear at the September 6th hearing. If the case goes to trial it could be next year before the case is heard.

Mr Jackson (25) from Oakleigh Park in Belfast and Mr Olding (24) from Ardenlee Street, Belfast are charged with raping the same woman on June 28th last year.

The charges stated that the alleged victim did not consent to sex and that both Mr Jackson and Mr Olding “did not reasonably believe that she so consented”.

Mr McIlroy (25) from Royal Lodge Road, Ballydollaghan in Belfast was charged with intentionally exposing his genitals on June 28th last year “intending that someone would see them and be caused alarm or distress”.

Mr Harrison (25) from Manse Road in Belfast was charged with perverting the course of justice by making a witness statement to police where he allegedly lied about his dealings with the alleged victim and omitted information relevant to the police investigation.

In relation to the charges against Mr Jackson the court was told that his lawyers will be seeking evidence at the committal hearing from a PSNI investigating officer and from a civilian witness, who is not the alleged injured party.

The court also heard that defence lawyers will be seeking from the prosecution film and photographs relating to the alleged rape.

And in relation to the charge against Mr Harrison of withholding information the court heard that his defence team would be seeking more information on the alleged “lies and omissions” that he told police.

Pending the outcome of the case Mr Jackson and Mr Olding have been relieved of their Ireland and Ulster playing duties by the Irish Rugby Football Union and by Ulster Rugby.

Last month the IRFU and Ulster Rugby said they viewed “these allegations extremely seriously” while noting that “the players have cooperated fully and strenuously deny the charges”.

In a statement the organisations added, “to allow the players time to address this matter fully Ulster Rugby and the IRFU have agreed that they be relieved of their duties and obligations until the conclusion of this process.

“Appropriate support structures will be put in place with them during this time.”

At one point last season Mr Jackson and Mr Olding were Ulster’s first and second choices at outhalf.

Since they stood down Ulster has recruited as a replacement Australian international outhalf Christian Lealiifano.

The Auckland-born player, who has recovered from leukaemia, is on a five-month contract with Ulster.