North West members delighted to be back on the fairways in Lisfannon, Co Donegal 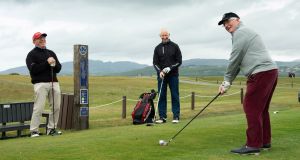 Since early morning, they have been out on the course. Their outlines dot the landscape, silhouetted against the grey of Lough Swilly and the clouds gathering above; there is nothing but sea, sky and golfers – each with a clear two metres between them.

The anticipation at North West Golf Club in Lisfannon, Co Donegal, has been evident since Saturday, when members arrived to pay their year’s fees.

“The buzz about the place was great,” says club captain Paul O’Hea. “It was like Christmas Eve, with everybody waiting. It was amazing.”

Golf courses reopened yesterday, under strict social distancing guidelines, part of the first easing of the lockdown imposed two months ago to limit the spread of coronavirus. Out on the course, the golfers’ joy is palpable.

“I’m bursting with excitement at being back,” admits Joe McGinley from nearby Buncrana. A golfer for 40 years, this is the longest he’s ever been away from the game.

“I love my golf, and it’s precious time for me –out with my male mates, in the fresh air, there’s a bit of banter, and you’re keeping mentally and physically well,” he explains.

Lockdown had been a strain on family life: “I was about the house a lot more. My wife’s glad to see me going out again.”

“Just to get out on the course again and to be out in the fresh air is fantastic,” says Gerard Kelly, who is playing with his brothers Bosco and Charlie. “It’s brilliant, just great to get out,” adds Bosco. “I’ve been having to dig the garden, paint the fence. I had to escape.”

John Spence agrees. “It’s been a long couple of months. It’s so good to be out, even the bad shots, you don’t mind them.”

Playing alongside him is Dermot Fullerton. “There’s also a lot of catching up to do. The last time I saw him was March 14th.”

Others are of the same mind.

“It’s the busiest we’ve ever been on a Monday,” says O’Hea.

Advance booking is just one of the measures introduced to comply with social distancing regulations. Golfers must arrive no more than 15 minutes ahead of their tee time; they check in at the shop and then go straight to the course; the clubhouse remains closed.

Tee times have been changed, to limit the numbers on the course at any one time; signs have been erected to remind people to observe social distancing, and a special device – a putt buddy – has been installed at every hole to allow hands-free removal of the ball.

As with all outdoor exercise, the 5km limit still applies, though the Golfing Union of Ireland (GUI) has said its members will not police this.

“In a way it’s a pity that this issue has been created. Garden centres are open. Are people going to be asked if they travelled 5k to garden centres?”

Roughly 50 per cent of the club’s membership is from the North; the 5k restriction cannot be enforced against them.

Charlie Kelly, from Derry, was stopped at a Garda checkpoint on his way to pay his fees on Saturday.

“They asked me where I was going, and they said I was from the North so they could do nothing about it.”

O’Hea is also from Derry, though as captain he has decided he should not play until the 5k restriction is relaxed.

“I am jealous, but I don’t begrudge them getting out. I’ll wait until the 8th [of June].”

While the Government schemes have helped, O’Hea estimates the club has lost around € 60,000 in revenue. Much of this will be impossible to recoup, as will the missed opportunities and cancelled plans, though he emphasises that this is not the priority; one of the club’s officials lost two members of their family to coronavirus.

Yet as the club reopens, there is also a sense of hope. New members have joined; among them Justin MacLochlainn. “I haven’t played golf in six years but I was cracking up indoors. This is good for your mental health. At least out here you can pass someone and say hello.”