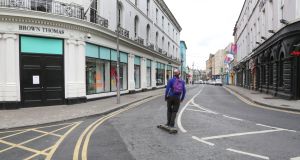 It was the day for which the nation has been pining: the freedom to play a socially distant game of golf or tennis - within five kilometers from home - and then the unbearable excitement of stopping off at the hardware store on the way home.

Galway could go out again. Sort of. So needless to say, the weather was a drag.

Galway city responded to phase one of Irelands’ great economic re-awakening with a few small queues of customers outside the retail parks but the city’s high street won’t feel right again until the day the many, many pubs can throw open their many doors. If someone dropped a coin at the top of Quay Street on Monday noontime, you might have heard it hit the cobbles down around Sally Longs.

Farrell’s garage on Brendan’s Avenue is a city institution run by brothers Gay and Patsy. They also work in sculpture and art when they aren’t fixing motors. Monday morning was the first time their garage has been open in seven weeks. “It is just nice to get back in again and get something done,” says Gay.

“There was no warning really as such. We just had to shut up shop and get out of it. We did one or two emergency jobs for HSE people during the lockdown. That was it.”

They have had work booked in for weeks so they are going to be busy in the weeks ahead. But the road outside their business remains quiet. “Normally you see cars going up and down Brendan’s Avenue.”

Still, this was a start. It was possibly Oscar Wilde who declared that you know your youth has passed when you find yourself standing examining electrical drills in an aisle in Woodies on a Saturday morning.

This may be true but it is also true that the Irish have a strange and needy relationship with the DIY and gardening behemoth. Any promise of sunshine prompts national raids on the barbeque and outdoor furnishing sections.

'Different. Interesting. Quieter and busier because it is all deliveries now'

It may have helped the safety policy that this Monday was overcast and cool. Still, with Woodies having spent half a million euro on Covid-19 safety measures, the lines outside the Terryland and Wellpark branches were considerable. You had to really want that bag of compost, that ten litres of masonry paint in order to wait. And many people did.

The story was similar in other stores. DID Electrical had been operating as an online facility but on Monday its doors were opened - and monitored. “Take your time,” said one customer who told the door-staff that he was after a vacuum cleaner. “The sooner I get it the sooner I have to go home and do the hoovering.”

The new shopping reality is going to demand patience. The number of customers permitted in stores at once is dependent on square footage and staff available. So at DID’s Briarhill branch, for instance, six people are allowed browse the aisles at any one time. The stores were busy and the arrival of people was fairly constant.

In the city though, things remained slow.

“Different. Interesting. Quieter and busier because it is all deliveries now. We open from 11 to 4 and then do the deliveries in the evening. For the first week I think we had four walk in customers. It is getting progressively busier. The two busiest days for walk-ins were last Friday and Saturday.

“In fairness, people were staying at home. They were making the effort. You do see more people walking around. Saturday was really busy but . . . we were just saying, it is probably the weather today.”

At least that much is back to normal.