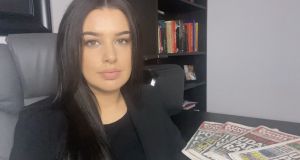 A Northern Ireland journalist has lodged a complaint to the North’s Police Ombudsman Marie Anderson over an alleged PSNI failure to investigate a threat to rape her baby son.

Sunday World Northern Ireland journalist Patricia Devlin, supported by Amnesty International and the National Union of Journalists, has claimed that the PSNI is not taking the threat seriously.

Ms Devlin said that in October last year she received a direct message to her personal Facebook account threatening to rape her newborn son.

It was signed by Combat 18, a neo-Nazi group which in the past has had links to loyalist paramilitaries.

Ms Devlin said the person suspected to be behind the threat is a convicted criminal, with links to loyalist paramilitaries and far-right groups, who is believed to have been involved in violent attacks in Northern Ireland.

“Because of my job as a journalist, exposing criminals and paramilitaries, I have been on the receiving end of threats of violence and death threats for years,” Ms Devlin said on Monday.

“In Northern Ireland that now seems to go with the territory where press freedom comes at the price of constant and repeated threats to journalists,” she added.

“But, when I received a threat to rape my new-born baby, also identifying my grandmother and the location of where the sender believed she lived, I had enough. I reported the threat to the PSNI and was even able to name the individual I suspect was behind the threat,” said Ms Devlin.

She added, “The police have had this individual’s name all this time. Yet, a year on, no one has been brought in for questioning, never mind arrested. Meanwhile, the police have given me a constantly changing and contradictory story as to why they have not acted.

“It is not acceptable for journalists to have to live under this sort of constant threat, to themselves and their families, simply for doing their jobs.”

Patrick Corrigan, Amnesty’s Northern Ireland director said the threats were totally abhorrent and were “part of a wider climate of violence which is now undermining press freedom in Northern Ireland”.

“Amnesty International has been watching with increasing concern the constant stream of threats being received by journalists in Northern Ireland, designed to shut down press scrutiny of criminal and paramilitary activity,” he said.

He hoped the complaint to the ombudsman “will help concentrate minds in the PSNI and ensure diligence in bringing these criminals to account”.

The NUJ general secretary Michelle Stanistreet said “that such despicable threats have been made is an outrage but that the subsequent police investigation has been so ineffectual and flawed is also completely unacceptable”.

Ms Devlin’s solicitor Kevin Winters said there had “been a systemic failure by the PSNI to advance the investigation expeditiously and meaningfully”.

“For a year, the police have had more than ample evidence to arrest the individual identified right from the start,” he added. “Explanations provided to date as to why that has not happened border on the farcical. It is incredible that even a letter of complaint earlier this year to the chief constable himself (Simon Byrne) has failed to have any impact.”

The PSNI said it encouraged “anyone with a complaint regarding police actions to contact the Police Ombudsman”.