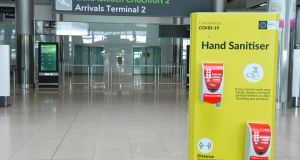 Essential maintenance workers at Dublin Airport have accused their semi-State employer of “threatening behaviour” after it cut their wages to 60 per cent of their pre-pandemic level over the weekend.

The workers say daa, formerly the Dublin Airport Authority, is “using Covid to ram through” work practice changes that will “fundamentally damage” their working lives and end secure jobs in their sector.

The pay reduction comes after the 130 plumbers, electricians, carpenters and maintenance staff in question rejected proposed work practice changes by a margin of more than 85 per cent, in ballots that closed last Friday. Their unions, Unite and Connect, are seeking legal advice on the pay cuts and have referred the dispute to the Workplace Relations Commission.

However, given the loss of 20 million passengers so far this year amid the Covid-19 pandemic and financial losses of €150 million, the daa - which is responsible for Dublin and Cork airports - says it has “no choice but to reduce spending in all areas”.

In April it placed nearly all of its staff on a four-day week with a 20 per cent pay reduction. “Talks on new ways of working to deliver additional cost savings and efficiencies were held with staff and their representatives during the summer,” said a spokesman.

A 19-page New Ways Of Working daa document calls for changes under five headings: “Follow the work; roster changes; team-working; sanitisation, and, the embracing of technology and associated processes.”

Airport craft workers who spoke to The Irish Times on condition of anonymity said that while they had no problem with much of the document, its acceptance in full would amount to “signing away” terms and conditions, including skills demarcations, rostering arrangements and allowances.

One, who has worked at Dublin Airport for more than 20 years, said: “It takes a lot for us to stick our heads out and speak to media. It’s out of desperation. We feel, if we take this now, our jobs will be gone in two or three years.

“One of the managers actually said to me, ‘This document is effectively the end of the unions in Dublin Airport.’ Of course we feel threatened.”

The plan would result in staff going from working 13 weekends and 52 nights per year, to 22 weekends and 90 nights, while on-call and overtime allowances would end.

The Dublin Airport workers are also concerned about provisions on working outside their core skillsets, which could see plumbers carrying out electrical repairs and carpenters shovelling snow from runways.

They argue changes in their sections are unnecessary as their workload has not decreased, even with falling passenger numbers, as they maintain the airport’s assets.

A spokesperson for daa said “The proposals... made no changes to staff terms and conditions... They introduced a new team-based model across the Dublin Airport campus with new rosters.”

He said the proposed changes had already been in operation in Terminal 2 for a decade, although they had now been rejected by the T2 workers. They had been accepted by craft workers in Cork airport, he added.

For the more than 90 per cent of the 2,000 staff in other areas who accepted new ways of working pay will be maintained at 80 per cent.

In an email to staff at the weekend daa chief executive Dalton Philips thanked those who voted in favour of the new arrangements, adding that airfield operatives, baggage operatives and the Dublin craft workers had voted against.

“Pay and working arrangements in these areas will be reduced to 60 per cent,” he said.

Rise TD Paul Murphy, who has raised the position of the workers in the Dáil, said their situation was yet another “case of elites using the pandemic to try to reshape social relations, laws and norms in their favour”. Several other industrial disputes exemplified this, he said. The “daa sees the pandemic as an opportunity to get rid of directly employed, unionised workers”, he added.