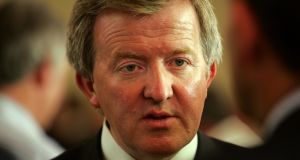 Fine Gael’s John Perry: said he would “not rush into a decision”on whether he would run as an Independent in the next general election

Former Fine Gael minister of state John Perry has failed to get a nomination to run for the party in the local elections in Sligo next May following a selection convention last weekend.

However, Mr Perry, who clashed previously with party headquarters over its refusal to let him run in the general election, is once again in dispute with Fine Gael over nomination rules.

He lost out last weekend when Fine Gael selected four local candidates for the Ballymote-Tubbercurry electoral area following a directive from headquarters that one candidate each be chosen from four geographical areas.

Three candidates were automatically selected, but Mr Perry lost out by 178 votes to 83 in a contest with former county councillor Gerard Mullaney in the Ballymote area.

In a letter to party general secretary Tom Curran before the convention, Mr Perry questioned the directive, saying it was “profoundly undemocratic” to prevent party members from freely choosing a candidates’ list.

Imposing a geographical rule “irrespective of the freely expressed collective votes of branch members is a denial of the most basic element of representative democracy”, he said.

Speculation is growing that Mr Perry will run as an Independent in the next general election, but he insisted on Wednesday that he would “not rush into a decision”.

Last July Mr Perry failed to win a Dáil nomination after a convention chose former TD , Leitrim-based business man Gerry Reynolds and Sligo county councillor Sinead Maguire to run in Sligo Leitrim. Mr Perry, who came third at the convention, is understood to have asked the party to consider adding a third candidate, but Fine Gael sources say this has been ruled out.

Fine Gael’s regional organiser Enda McGloin defended the local elections strategy, saying Fine Gael had run too many candidates in the 2014 locals, winning just three out of 18 seats after holding 12 out of 25 seats previously.

He said the decision to exclude Mr Perry had been made by South Sligo party members, who had by a margin of 178 to 83 votes given “a fairly comprehensive victory for Mr Mullaney”.