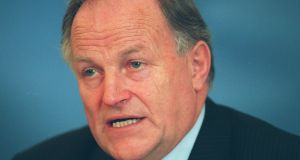 John Browne, while a Fine Gael TD for Carlow-Kilkenny in 1998. File photograph: The Irish Times

Taoiseach Leo Varadkar has paid tribute to former Fine Gael TD for Carlow-Kilkenny John Browne following his death at the age of 82.

The Carlow native served as a TD for 13 years until his retirement ahead of the 2002 general election and was Fine Gael’s health spokesman for a period in the 1990s.

He also spent time as a senator and served as his party’s spokesman on communications in the Seanad in the 1980s. He also served as a Carlow county councillor .

“I was very sorry to learn of the death of a member of our Fine Gael political family, John Browne,” Mr Varadkar said.

He said Mr Browne had served the people of Carlow-Kilkenny “and our country with distinction”.

The Taoiseach also highlighted the fluent Irish speaker’s “love of our language” which, he said “was evident in his many contributions in the Dáil and Seanad”.

Mr Varadkar said that in his roles in health and communications Mr Browne had helped to shape the party’s policies, and “made valuable contributions on a range of issues including European affairs, education, social welfare, the Irish language, criminal law, and overseas aid”.