The death of Jonathan Corrie could have been prevented, says another homeless man 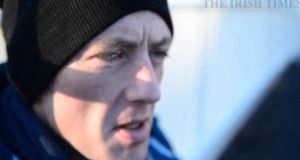 A still from a video by Bryan O’Brien showing John Smyth speaking about his experience of being homeless in Dublin.

John Smyth was once a man with three trades. Now he is on the streets, one of 160 people sleeping rough every night in Dublin city centre.

Mr Smyth (32), originally from Crumlin, says his heroin addiction has left him on the street. He has been on the streets on and off for three years and full-time for the last year when his girlfriend kicked him out after he started using again.

Intelligent and articulate, Mr Smyth spends his days on the Ha’penny Bridge, a symbol of Dublin and a favoured spot for beggers.

He believes the death of homeless man Jonathan Corrie (43) could have been prevented.

“It’s typical that it took a man dying to get it on the front pages of the newspapers,” he said.

“It is in the heart of the city where people will take notice. People have the same struggles like him every day.”

Mr Smyth believed that Jonathan Corrie may have stayed out over the weekend rather than opt for a bed in a hostel for financial reasons. “People tend to do a lot more begging at weekends to try and get them through the rest of the week”.

Mr Smyth likened getting a bed at night to “playing the lottery. You don’t know whether you’ll get a bed or a sleeping bag”.

He inquired as to when the 200 cold weather beds will be opened and why, when there are so many empty Nama hotels, that one of them is not turned over to the homeless.

“That man died as a result of hypothermia. It was something to do with the cold anyway.”

He sleeps in a tent in a field because trying to sleep on the streets of Dublin is too difficult. “When they see a sleeping bag, they (some of the public) just want to pick on you. It attracts trouble when there’s a sleeping bag.”

Mr Smyth said most of the public are good though there are exceptions. “I’ve been spat on and urinated on. Coming up to Christmas they tend to be in better form. People tend to be a bit more generous and they sit down and they have a chat with you which is better than money. A lot more food is being given out by the public”.

He was once a qualified bricklayer and a qualified rigger. “I have three trades behind me. I could build anything. I have great hands. I spent eight months as a carpenter.

“I’ve sent my CV to every building company in the country, but they say, ‘you’ve no home, where are we going to pick you up’.”

Mr Smith said his ambition is to repair his relationship with his family, his girlfriend and his two-year-old son.

“I chose drugs over them (my family). I’m seeking treatment through Trinity Court. ”