‘Is home what I knew or what I know?’ New Irish citizen’s poem reflects on homesickness

The video was shot between Harold’s Cross, North Carolina, and airports in Dublin, New York and Charlotte

Poet Erin Fornoff from the US has recently become an Irish citizen. A regular on the Irish spoken word scene she has released ‘Home,’ a powerful piece of poetry film which reflects on homesickness. Video: David Knox NoName Video/PushPull Media 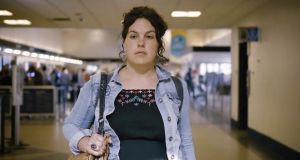 Erin Fornoff, originally from North Carolina has been living in Ireland for the last 10 years.

A poet, who recently became an Irish citizen, has released a short poetry film reflecting her homesickness.

Erin Fornoff, originally from North Carolina has been living in Ireland for the last 10 years.

She wrote Home, which was shot and directed by David Knox of NoName Video and PushPull Video.

The film was shot between Harold’s Cross, airports in Dublin, New York and Charlotte as well as Ms Fornoff’s childhood home in Asheville, North Carolina.

“After 10 years here, I’ve recently become an Irish citizen. After praying for the letter it felt like a huge privilege, but also brought up a lot of feelings about what home means - Ireland or America,” Ms Fornoff said.

“It took me three weeks to tell my parents, because I worried they’d think I was gone forever. I’ve performed this poem often, and I can tell every person who is from somewhere else by the look on their face. You can always tell the homesick ones in the crowd.”

Ms Fornoff hopes the poem will be the centre of a larger piece of work on home and immigration. She has performed across Ireland and the UK, including Glastonbury, Electric Picnic and on RTÉ and BBC3.