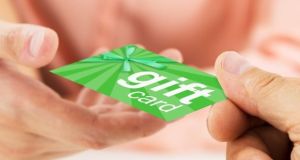 New laws which will impose consumer-friendly rules on a largely unregulated gift voucher industry are to come into force early next year.

A five-year minimum expiry date for all vouchers as well as ban on companies insisting consumers must spend vouchers in a single transaction form key parts of the Consumer Protection (Gift Vouchers) Bill 2018 published by Minister for Business, Enterprise and Innovation, Heather Humphreys on Thursday.

The cancellation of gift vouchers or the imposition of charges if a recipient’s name is registered incorrectly will also be banned. However, plans to curb maintenance fees on gift cards have been shelved, at least temporarily.

The legislation will not apply retrospectively to vouchers purchased before it is in force.

“Every year consumers lose out because their gift vouchers go out of date,” Ms Humphreys said. “Part of the problem is the great variation on expiry dates which can range from as little as six months to 12 months to 24 months. This often leads to confusion amongst consumers.”

She said that having a fixed five-year expiry date on all gift vouchers would bring certainty to the sector.

“This has been a real bugbear for people for many years and, of course, it’s particularly relevant now in the run up to Christmas when many of us will buy gift vouchers for family and friends,” she said.

She said there was “cross-party support on this issue” and expressed the hope that the Bill would become law in early 2019.

Along with the extending of expiry limits to five years, consumers will no longer be obliged to spend vouchers in a single transaction as is sometimes the case. Under the system as it stands, if a person has a voucher for €100 but wants to buy something for €50, the shop or provider can either make them spend it or lose whatever balance remains.

Companies will also no longer be allowed to cancel vouchers if there is an incorrect name or spelling on it or charge additional fees to correct the name. This problem has frequently arisen with airline vouchers when the name on the voucher does not correspond exactly with the name on the recipient’s passport.

Ms Humphreys said it was “not fair that businesses can penalise consumers simply because of a wrong letter in a name”.

A draft of the Bill had included a provision giving the Minister the power to set fees for the issue and replacement of gift vouchers and for ‘inactive balances’ on gift vouchers.

However, legal issues emerged on foot of advice from the Office of the Attorney General and the Office of Parliamentary Council, which, the Minister said, need further examination.

Rather than delay the Bill indefinitely, she decided to progress the legislation “without this provision for now to ensure that the five-year expiry date and other protections are in place for consumers as soon as possible”.

She expressed a hope that she would be in a position to introduce an amendment to deal with the fees issue at a later stage.

This is the fourth time legislation aimed at tackling a largely unregulated sector worth in excess of €600 million each year has been proposed.

In 2009, the Labour Party made an attempt to bring about legislative change with the Consumer Protection (Gift Vouchers) Bill but it was rejected by the government of the day.

In 2015, the then minister for enterprise Richard Bruton published a draft consumer rights Bill which contained a number of provisions for the regulation of vouchers but it never became law. And an attempt by the Social Democrats to bring another Bill before the Dáil last year came to nothing.