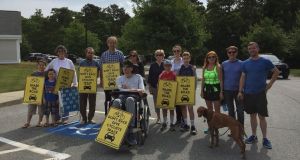 Pádraig Schäler with family and friends aim to raise awareness of road safety in Cape Cod, Massachusetts, where he was injured as a cyclist five years ago.

A young Irish cyclist who suffered a catastrophic brain injury when he was involved in a serious road accident in Cape Cod five years ago returned to the site of the crash in Massachusetts on Wednesday in a bid to raise awareness of his case and to highlight the dangers posed to cyclists on America’s roads.

This morning, Pádraig Schäler (27), his family, friends and local well wishers were given a police escort as they retraced the final mile of his journey to the location of the crash on Route 6A in Brewster, a small town located in Barnstable County, near Cape Cod, Massachusetts.

A promising swimmer, Pádraig Schäler had just completed a degree in history and Irish in Trinity College Dublin in 2013 when he went to work in the US on a J1 visa. His life was changed in an instant on the morning of June 27th when he was very seriously injured in a collision with a van while he was cycling to work.

At one point his parents were told that he would have “an intolerable life” and might not survive his injuries.

“Nearly 20 people with two police cars front and back keeping us safe. When we got there, a small sign we had put into the ground had been ’refurbished’ and put into a more prominent location with a small flower bed. And then, at the time of the accident, a lady jogger passed by who had witnessed the accident and provided first aid to Pádraig. She stopped by and none of us could believe it!”

Pádraig spent several weeks in a US hospital before he was flown home to a high- dependency unit in Dublin’s Beaumont Hospital. A shortage of beds in the National Rehabilitation Hospital led to Pádraig being transferred to a specialist rehabilitation centre in Germany.

He is still unable to speak or fully control his movements but has made significant progress over the past five years, due to an extensive neuro-rehabilitation programme largely financed by his family and friends.

Pádraig, who still needs 24-hour care, left his home in Glasnevin for the US on Monday accompanied by his parents, Reinhard Schäler and Patricia O’Byrne as well as one of his closest friends Cian Waters.

“When he was brought back to Ireland, it wasn’t clear at all that he would survive the journey but he did and now he has come back (to the US),” said his father, Reinhard.

“And he understands what’s going on - this is really good. That is what we wanted to achieve - a little bit of closure. We wanted to make new memories and to put down a marker to say that life continues,” he added.

The return journey to the Cape Cod area has been difficult and emotional for Pádraig and his parents.

“We could just burst out in tears at any time and that is really what we want to overcome. We want to get over this feeling of being a victim and take control back again of our fortunes and our lives and work as much as we can on doing what Pádraig used to really love which was travelling.

“He really enjoyed travelling and he is able to do that again. To take that trip across the Atlantic, he was so excited about it and was looking forward to it so much. Of course it is tiring and we have jetlag and the emotions of being back here are sometimes difficult to take, but to be able to do it is almost a miracle.”

Pádraig has no recollection of the crash or of the time he spent in hospital in the US but the family visited the intensive care unit on Tuesday and met the doctors and nurses who cared for him.

“He was really, really, happy to see what we had told him about over the last few years. We told him how the accident happened but he has no recollection of it. And the time we spent here, he was in a coma. I think it is good for him to recover that lost memory.”

Mr Schäler said the family wanted to use their visit to raise awareness of Pádraig’s case and to promote responsible driving in a country where ‘car culture’ prevails.

The family invited J1 students, friends and residents of Cape Cod to join them on Wednesday morning as they walked the ‘last mile’ from the Brewster Police Department on 631 Harwich Road to the location where the accident took place near 2019 Main Street, Brewster.

“I don’t think it happens every day in Cape Cod that people do this kind of thing for cyclists and walk along with a wheelchair,” Mr Schäler said.

On their arrival in Boston this week the family met with officials from the office of Massachusetts Attorney General Maura Healy for an update on issues they had raised in relation to the investigation.

“I told them that we are not done, that we have just started.”

Officials told the Schälers they would communicate the family’s concerns with the attorney general.

“They said that they would tell her about the case and said they really understood the points that we wanted to make.”

Mr Schäler said he also raised the issue of safety and driver awareness with officials.

“I made suggestions that they should look at driver education such as the RSA videos they are running on RTÉ showing how to overtake cyclists. There is none of that here. They said they might look at that. They said they might also think about insurance for drivers. There are big systemic problems here. I don’t think that Pádraig’s accident will change them but maybe the next time something like that happens people will remember.”

“When we get the written statement from the attorney general we are not going to leave it because you have thousands of people and students going to Boston and to Cape Cod and this could happen to anybody,” Mr Schäler said.

Since the time of his crash Pádraig’s family and friends have organised numerous fundraising events, including a song recorded by 40 of his friends, to help pay for the financial cost of the accident which has been estimated to be around $12 million.

“We would not have made it without the help of Pádraig’s friends. They are just unbelievable. I never would have expected anything like what has happened over the last number of years. There are dozens of examples and that is not even to mention their moral support, and the energy they shared, and their friendship.

“When you know that there are so many people helping you and supporting you it really helps you through even the most difficult times,” Mr Schäler said.