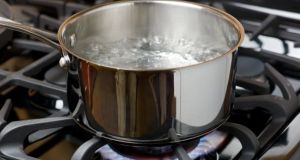 The utility has said there is little point in providing water tankers for use by schools and hospitals as water from a tanker would have to be boiled, and is therefore no different to that which is available in taps in affected premises. Photograph: File/iStock

Irish Water is awaiting the results of a water quality audit of its Leixlip plant due on Tuesday afternoon before any decision is made to lift a boil water notice which is affecting more than 600,000 people in the greater Dublin area.

The latest boil water notice – which affects most of north Dublin, as well as parts of counties Kildare and Meath – has been in place since Monday last week.

Meanwhile the utility has said there is little point in providing water tankers for use by schools and hospitals as water from a tanker would have to be boiled, and is therefore no different to that which is available in taps in affected premises.

The boil water notice was imposed after heavy rainfall was blamed for “high turbidity levels” – water cloudy with matter or sediment – which led to the risk of microscopic parasites, cryptosporidium and giardia, in the water supply.

It is the second time in two weeks that a boil water notice has been imposed for water coming from the older of two Leixlip plants. The difficulty has led to Irish Water managing director Niall Gleeson remarking that he would like to “blitz the whole thing” but he can’t because it feeds a fifth of the capital’s taps.

Mr Gleeson accepted this meant further boil water notices could be issued until the upgrade works are expected to be completed some time next spring. Measures were also being put in place to help the plant cope with weather events expected over the winter.

“We are hoping it will be more resilient but there is the possibility we will have to restrict that plant (again),” he said.

However the Environmental Protection Agency has said it believes the work Irish Water is doing at the plant, upgrading the filters, may be not enough.

The authority said an additional treatment barrier may be required, such as ultraviolet disinfection which it has previously recommended.

The EPA said it awaited Irish Water’s report on this matter which is due by November 30th.

Officials from the EPA, Irish Water and the Health Service Executive (HSE) carried out an “audit” at the Leixlip plant on Friday.

Mr Gleeson said all agreed that it was working satisfactorily again since around 5pm on Wednesday, but in order to give the HSE “more confidence in the plant” they wanted to continue testing until Sunday.

The results will not be available until Tuesday.

“At that stage, assuming all the samples have passed or are satisfactory, we will be able to lift the boil water notice at some stage on Tuesday,” he told RTÉ on Friday.

“Ideally, if we had more head room in Dublin I would shut down that plant and we would have done the works in a six to 12-month period – just blitz the whole thing.

“But because we have to keep production going and because it is 20 per cent of the supply [for Dublin] we’ve got to carefully do those works while the plant is running.”

Mr Gleeson added that the country’s water infrastructure generally was “not in a good place” and he appealed for patience from the public as boil notices may be issued elsewhere.

The EPA has warned “the ability of the Leixlip plant to maintain an appropriate level of performance remains a concern”.

“Irish Water are undertaking filter upgrade works to address the immediate treatment deficit at the plant,” it said in a statement.

“However, an additional treatment barrier may be required, such as ultraviolet disinfection as recommended in the EPA’s previous audit.

Minister for Housing, Planning and Local Government Eoghan Murphy voiced his “extreme disappointment” that the boil water notice is continuing.

“People in the affected areas have shown incredible patience and fortitude in the face of this ongoing major disruption to daily life and business, and I thank everyone for that,” he said.

“Regretfully, the audit today has found that more work is needed to make the Leixlip plant operate safely again.

“Irish Water must now progress these works without any delay.”