Water penalties to be decided by energy regulator 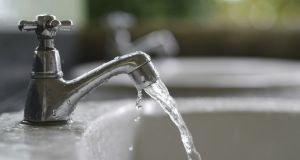 The Commission for Energy Regulation is to be asked to set the financial penalties homeowners will face if they excessively use water. File photograph: Getty Images/iStockphoto

The Commission for Energy Regulation (CER) is to be asked to set the financial penalties homeowners will face if they excessively use water.

A new charging regime for water will come into force in January 2018, with the first bills for wasting water to be sent in July 2019.

Minister for Housing Eoghan Murphy is to seek Cabinet approval this week to proceed with legislation to implement this new system.

However, discussions are ongoing between Mr Murphy and Fianna Fáil spokesman on housing Barry Cowen about the wording of the legislation.

It is currently proposed that the CER will examine water consumption patterns and provide a report on them to the Minister for Housing.

Average consumption is currently set at 127 cubic meters, with the figure for wilful waste to be 215.9 – 1.7 times normal usage.

Householders will be required to pay for water used above this level. However, it will be the CER, not the Oireachtas, which will set the payments required, which will be determined on a volumetric basis.

Water usage will be monitored over a year beginning in January and households will get a notice of their usage after 12 months.

Households will then be given six months to bring the usage to below the threshold or face a fine.

Provision will be made for those with medical needs who require extra water.

An average allowance for larger households of five or more people will be made.

Going by previous figures, it is estimated that up to 70,000 households - or about 8 per cent of customers - will face fines under the new system. These households are currently using 30 per cent of all domestic water.

Government sources said the regime was aimed at encouraging water conservation and curbing of water usage.

The legislation will also include provisions for a referendum to enshrine the public ownership of Irish Water in the Constitution and other recommendations from the Joint Oireachtas Committee on the Future Funding of Domestic Water Services.

The committee was set up by the Government after the last election, following significant opposition to the retention of water charges.

In the area of metering, the State is to no longer sponsor a metering programme. The committee agreed to district metering being used to determine excessive usage instead.

Mr Murphy has already secured Cabinet approval to refund some 990,000 householders who paid the controversial water levies before they were suspended last year. The refunds will cost some €173 million and cheques will be posted to households by the end of the year.

Mr Murphy said €114 million would have to be transferred to Irish Water this year to cover the funding gap arising from the suspension of the charges.

This would have to be drawn from central Government funding and would have to compete against other capital projects in the health and education sectors, he said.

Households will receive up to €325 through the water charges refund process, but this depends on the amount paid over the five billing periods.