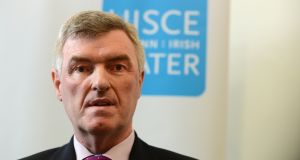 Former Irish Water managing director John Tierney was paid a total of €655,000 by the company last year in salary, severance and pension contributions.

The figure has been disclosed as part of the annual report for 2016 by Irish Water’s parent company, Ervia.

He earned €67,000 in salary last year in the months up to his retirement.

The former Dublin City manager, who worked in local government for 36 years before joining Irish Water, was paid a €200,000 annual salary when he was appointed by minister for the environment Phil Hogan in January 2013 on a three-year contract.

At the time of his retirement, Irish Water said that Mr Tierney would have been entitled to a similar package upon retirement from the local authority.

Irish Water stated that Mr Tierney “carried his full service to his new employer and, in line with Government guidelines regarding the transfer of staff from local authorities to Irish Water, his retirement arrangements are exactly the same terms that would have applied had he retired as Dublin City manager.”

The report discloses that Irish Water’s profit after tax increased threefold to €54 million in 2016 compared with €17 million in 2015.

However, its revenues from domestic water charges were less than a tenth of the previous year, €22 million compared with €232.5 million in 2015. Domestic charges were suspended by the Government in March of that year pending a review and have now been abolished completely.

As a result, the Government subvention to Irish Water rose from €399 million in 2015 to more than €650 million last year, with the company making increased provision for impairment.

“The suspension of water charges has had a direct impact on the domestic water collection. The company has recognised an additional impairment allowance in respect of domestic revenue,” the report said.

It said Irish Water had made significant progress on improving water quality. In 2016, 37 water supplies were removed from the Environmental Protection Agency’s “Remedial Action List” while the number of households subject to boiled water notices fell from 8,970 to 5,511.

Ervia also operates Gas Networks Ireland. Its annual statement disclosed that revenue had increased by 5 per cent to €1.4 billion, while profit before tax increased by a third to €203 million.

New network investment included the completion of the 46km gas main extension to Wexford town and the start of work on a 50km gas pipeline linking Ireland and Scotland.

“Thanks to the development of the Corrib [gas field], ongoing investment in infrastructure and the imminent arrival of renewable gas on the network, Ireland’s gas supply has never been more secure.

“There are over 680,000 natural gas customers in Ireland with natural gas now available in 20 counties,” Ervia said in its statement.